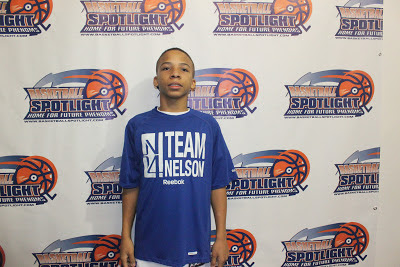 The Mid Atlantic AAU 6th Grade Final Four semifinals went as predicted as Team IZOD and Team Nelson cruised to victories. Here are the scores and top performers that we saw in Chi-Chester, PA.

Kasim Toliver Guard (Team Nelson)- This kid seems to look better every time I see him play. He has an old soul on the basketball court which means he plays like a throwback. He doesn’t care about flash but instead kills the opposition with crisp passes and accurate floaters in the lane.

Dontae Scott Forward (Team Nelson)- Scott has dropped the baby chubbiness and it has helped his game tremendously. He now runs the floor better and gets up higher off the ground. If he continues in this direction he could help Team Nelson win another Grand Finale crown.

Chris Allen Guard (Team Nelson)- The smooth shooter plays well alongside Toliver. He also understands the game and will quickly drift to the perimeter even in transition. His stroke stretches the defense.

Jordan McKoy Guard (Team IZOD)- “The Real” McKoy came out on fire to help put Team Philly away early. He had bruising drives to the basket with soft finishes. When he’s aggressive and successful like this he’s a joy to watch.

AJ Hoggard Guard (Team IZOD)- Hoggard continues to show how you can dominate a game without scoring the ball. In this contest he really enjoyed pushing the pill and dishing the rock to teammates for easy buckets.

Jalen Gaffney Guard (Team IZOD)- Gaffney got things going on both ends. On defense he pressured the rock which helped cause several turnovers and on offense he scored the rock with easy drives and fast break buckets.
Posted by basketball spotlight at 10:50 AM