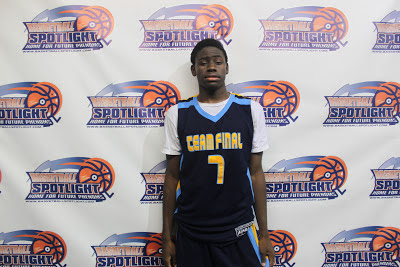 
The Mid Atlantic AAU 8th Grade Final Four semifinals gave us the best games of the day. Both games were exciting and came down to the wire. Here are the scores and top performers from yesterday.

D’Andre Vilmer Forward (Team Final)- Team Final was in deep trouble in the second half until Vilmer took over. The slashing forward went on a personal scoring spree that brought his team back from a 16 point deficit. He reached into his bag of tricks and saved the team yesterday.

Manny Stokes Forward (Team Final)- Stokes has good size for the his position while producing both inside and outside. He’s still a little raw and timid at times but this is his first year playing AAU on this level. His best days are definitely ahead of him.

Devin Hill Guard (RIP City)- As a former Team Final player Hill came to the game with a chip on his shoulders. He came out in attack mode while hitting runners and pull-ups in the lane. His played helped RIP City storm out to an early big lead.

Damon Tobler Forward (RIP City)- While Hill did work on the perimeter, Tobler was a monster inside. The lefty exploded for many rebounds and strong put backs. He’s a combo guard size but his leaping ability helped him destroy the inside defenders. He had a great day.

Mark Webb Guard (MCB Elite)- Webb was likely the top performer of the day as he punished SJ Jazz with 29 points. The Jazz had no answer for Webb’s breakdown ability and craftiness to finish at the rim. This kid never stops attacking the defense and has a scorer’s mentality. He heated up quickly.

Darrien Mackay Guard (SJ Jazz)- Mackay steady play fits great into his coaches system. He plays the game under control and hit the outside shot when left open. I like his poise and production in this heated contest.
Posted by basketball spotlight at 12:56 PM