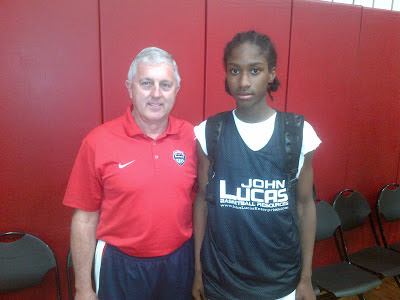 Guess who's back!!! It’s me again Bballspotlight, Deondre Bourne and let me start off by saying what a day. I started my day off anxious because I couldn't wait to play ball and get myself evaluated. I really want to see where I stand nationally.

After breakfast my dad and I hopped in the shuttle van towards St. John School and I couldn't wait. As soon as we got to the gym I got my jersey, changed up and found out who's on my team and went right to work. We did one hour of warm up stations just so they can see where our skill set stood. When the hour was up we all sat in the bleachers then Coach John Lucas came out to introduce his self and some of his staff which consist of former NBA & WNBA players, former NBA coaches, college coaches and over sea players plus. Then Coach Lucas brought out the USA Basketball 16U team head coach Don Showalter. Coach Showalter explained to us that not only were we there to get evaluated and learn new things but we are also there to get a chance to get invited to the USA Basketball 16u tryouts in Colorado. After a little lecture we went straight into drill for about 3 1/2 to 4 hours. We did ball handing drills which I did extremely well on thanks to my trainer Jerry Powell. We did post up drills, defensive drills, we worked on passing, we did yoga we ran track and my favorite drill "shooting" which I hardly missed in. We also did the 1 on 1 drill which everyone in the gym was kind of waiting to see. I did pretty well against Quade Green until the coaches switched us because we played great defense on each other. Midway through the station Coach Lucas had to scream on a bunch kids because they were BADLY out of shape. I'm thankful I wasn't in that out of shape category, my dad makes me jump rope a run everyday. Thanks DAD.

We had a hour break to relax and eat lunch before our games so I took that time to go walk around and introduce myself to a few scouts. It was funny when I went to go shake hands with Clark Francis from Hoop Scoop he stopped me in my tracks and said "what is your real name because my friends and I call you the kid with braids from Brooklyn" he said the reason was a few websites on the internet spells my name wrong so he didn't know which spelling is the correct way.

Now it’s game time and I was ready, sad to say that everyone including some of my teammates swore they were superstars and felt there was no need to pass the ball it was so bad that Mr. Van Coleman from hot 100 hoops had to stop the whole camp to tell everyone to stop playing selfish. The selfishness kind of bothered me a little because I didn't get to the ball besides taking it out of bounds (LOL). When I finally got the ball I came down court and shot a stupid frustrated three pointer which I missed and my coach looked at me like I was crazy. I had to sit down for a second just to get my mind right then I thought about what Mr. Paul Biancardi from ESPN said to us earlier "Don't prove to us Improve to us". That was all it took before I was doing everything... I was double teaming, setting traps, cutting hard to the basket etc etc, basically doing all the little things. I was scoring off the put backs and steals. Since I started grabbing rebounds I was controlling the ball more and I got my teammates involve. The second game was different I was on fire, I was knocking down mid range shots like I was making lay ups, EASY. My team was happier now because we were all scoring. After the game a few parents and coaches told me I was a smooth guard and great shooter they also said they like the way I was passing and how I lead my team.

Well it’s getting late now and I have to be back at camp at 6:30. God willing I will be back tomorrow with my final day at the John Lucas Camp.
Posted by basketball spotlight at 1:09 PM