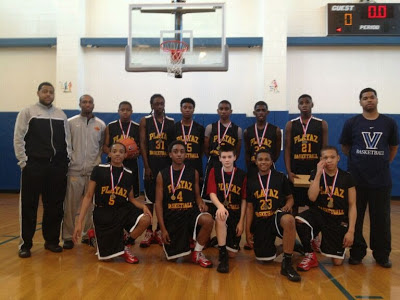 Can The Playaz Step In The Spotlight?

The 7th Grade Division will give us a chance to see a new champion at the MDC. I’m looking forward to see which squad is willing to step up and take the Gold Ball. Here’s a breakdown of the 7th Grade teams making the trip to Neptune.

Playaz: PBC would probably have to be the favorite as they have been playing some great ball lately. Now they will have to put everything together to take the Gold ball back to Paterson. The heat is on and we will see where they stand.

Mass Shooting Stars: MSS recently won a tournament featuring some of the same teams at the MDC. Therefore this well coached squad can also be looked at as one of the favorites. The Gold Ball is for the taking if they are willing to go get it.


Rens: If the Rens are playing on their game they should run through this event. But for some reason the Playaz seem to have their number. It will be interesting to see how they handle the bright lights.

Team Final: I heard this squad was ready to step forward but they didn’t respond well at the Mid Atlantic Final Four. Now they are ready to erase the doubters by performing under the bright lights of the MDC. It’s Showtime!

Milbank: After knocking off the defending National Champs these boys are walking with a different swag. Hopefully they can keep the confidence going into the MDC.

NWK: The Newark boys have been a little quiet since the MLK. We look for them to wake up once they touch down in Neptune.

Team 85: Kevin Johnson’s crew feels like they are ready for the Orange division. Now they must enter the ring and get ready to tangle. We wish them luck.

Team Rebels: TR showed some toughness during the AAU Regionals. So we expect them to come out swinging in Neptune. This Chester/Delaware crew always leaves everything on the floor.
Posted by basketball spotlight at 1:17 PM