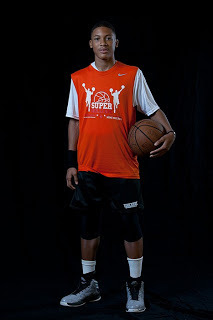 Nate Pierre Louis showed why he is considered a Top 20 player in the class of 2017 at the Basketball Spotlight Atlantic City Showcase. Nate got buckets in front of future Kentucky Wildcat Karl Towns who came to watch him in Atlantic City. Pierre Louis also displayed some superb court vision which shows his work in defining that part of his game.

Posted by basketball spotlight at 9:19 AM