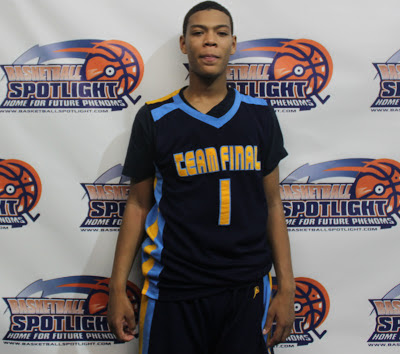 The Team Final pipeline to Neumann Goretti High School continued as Quade Green will be taking his talents to the Philly Catholic League powerhouse. Green has made a name for himself on the Spotlight circuit the last few years even winning Most Outstanding Player as a 7th Grader. He now will follow Team Final guards Jaquan Newton (Class 2014), Lamarr Kimble (2015) and Vaughn Covington (2016) into Neumann next year.

Green's AAU coach Orlando Hildago feels his point guard is comfortable with this decision. “Well he had a lot of interest from other schools but in talking with his mom we felt that this was the best school for him and would suit his style of play. He also will get a chance to study, battle and learn under older Team Final guards such as Lamarr Fresh Kimble and Jaquan Newton. I think he has a chance to develop and be ready when his time comes.” said Hildago.

Posted by basketball spotlight at 11:28 AM