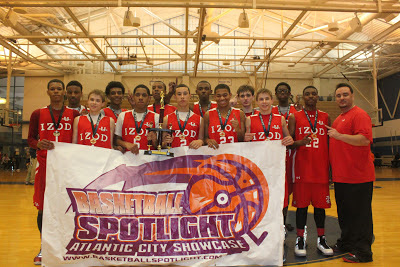 Can Team IZOD Hold On To The #1 Spot?

The 8th Grade Orange Division should be ready to explode in Neptune, NJ. It’s stacked from top to bottom and there’s nowhere to hide. Here’s a look at some of the top teams and players at the MDC.

Team IZOD: The region’s #1 squad is coming off a NJ State crown and will be looking to capture another Spotlight title. I said in the beginning of the season that they had the experience to win it all and now it seems like they are on course. They have a tough pool with a Sunday showdown with Rens.

CBC: The “Money Team” said they came down just to prove they are still the best team in the region. They lost a few players but with the Martin brothers still intact they are capable of running the table. I look forward to their Sunday matchup with Metro Flyers led by Nate Pierre Louis and Aaron Clarke.

Metro Flyers: Speaking of the Metro Flyers, the newly formed squad has reunited the talented backcourt of Pierre-Louis and Clarke. Now they will try to return to the winning days of Team Battle and IZOD.

Playaz: PBC will be ready to regain the #1 slot. They have a serious pool featuring the dangerous Milbank and gritty PYO. I hope the “Terminator” is in the building because they will need his guns blazing.

Team Final: TF is playing their best ball right now which means they have a shot at winning it all. They will have to dig deep to knock off an extremely talented New Heights and Expressions Elite. I can’t wait for this to go down.

Expressions Elite: The X-Clan has received a lot of hype since forming this group. Now it’s time to show and prove. This loaded group will have its work cut and I can’t wait to see them clash with Team Final on Sunday.

Milbank: After making it to the finals of the AC Showcase “The Bank” showed they are back among the elite in the region. Now they have a chance to increase their stock by making a deep run in the MDC. Don’t sleep on “The Bank”.

New Heights: Word from NYC is that Paul Person will be suiting up with this crew this weekend. This should make things very interested in their loaded pool. Don’t be surprised if they make the leap to the final four. Black Mambas: BM made a little noise in AC, now they have their sights set for the challenging MDC. I hope they are ready for the grind because this is a bumpy road.

Rens: These boys feel like they are really the best team in the region. What better way of proving it them winning the MDC and taking home the Gold Ball. Lights, Camera, Action let’s go!

PYO: The rugged Philly bunch will be looking for their first Spotlight title. They will have to defeat some pretty good teams to get to the winners circle.

RIP City: Last year they won the 7th Grade Blue Division crown. Now they must move on to the Orange and face this serious load of talented teams. Good luck to Rip Hamilton’s crew.
Posted by basketball spotlight at 11:06 AM