On The Rise: Toliver Making Strides 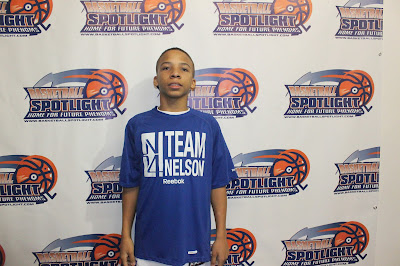 After a tough start Team Nelson is now on pace to repeat as Grand Finale Champions. Tolliver quarterbacked his squad to the championship despite playing some of the top teams on the East Coast at the AC Showcase. Though their scorers (Bradshaw and Jones) get a lot of credit but Coach Howard believes point guard Kasim Toliver is a major reason for their success. “Kasim is an unselfish point guard that has been running the show for us for the past two seasons. This year he has been asked to contribute in the scoring column and has stepped up. During the Middle Atlantic District Championship he averaged a double-double (10pts and 10ast.) while also playing lockdown defense” he finished.

Tolliver will have to keep up this type of play in order for Team Nelson to take home the ultimate banner in June at the Grand Finale. Stay tuned as Basketball Spotlight brings you more features on some of the top prospects in the country.
Posted by basketball spotlight at 8:32 AM