Harris Headed To The Patrick School 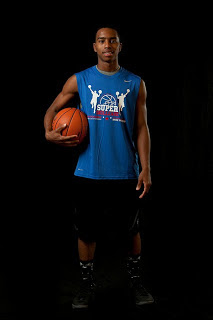 Jamir Harris Will Be A Celtic

Jamir “Terminator” Harris has decided to attend The Patrick School. Harris known from his young days with the famed Team Battle squad stormed back on the AAU scene this season with the Playaz Basketball Club. He led the Playaz to a final four finish at the Tip Off Classic and their first Spotlight championship during the Clash For The Cup. He’s currently the leading candidate for the Basketball Spotlight 8th Grade Player Of The Year.

Jamir’s father Laquan Harris was confident in the choice of the Patrick School. “We wanted to find a school where the coach could teach Jamir the tools he needed for the next level and we believe Coach Chevannes is one of the best in developing players especially guards” he said. Basketball Spotlight would like to congratulate Harris on his decision and wish him the best in the future. Harris will be returning to the Spotlight with the Playaz at the MDC.

Posted by basketball spotlight at 1:03 PM