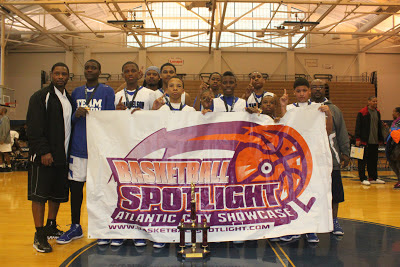 Can Team Nelson 3-Peat At The MDC?

The 6th Grade Division at the MDC is loaded with some of the top teams on the East Coast. Here’s our look at who will be in the building chasing the Gold Ball.

Team Nelson: The #1 team in the region will be looking to collect their third consecutive Gold Ball. They have been on a hot streak lately and should be looked at one of the favorites.

CIA Bounce: The Canada crew returns to collect another banner. They won the Clash For The Cup in impressive fashion. I wonder if there’s anyone that can match up with this loaded squad.

ETU Select: The PV Powerhouse has been so close to winning their first Spotlight crown. Now they embark on the MDC and maybe this might be their time to shine. They certainly have the pieces.

Metro Flyers: The NY boys are also looking to get over the Spotlight hump. They have a hungry crew and will use a pressing style to get the job done. They should be ready for the dog fight.

6th Man Warriors: The VA Champs are one of the hottest teams on the circuit right now. They have been a final four participant before and now will look to repeat this feat at the MDC.

Team RIO: These boys have been on the road for a while and maybe some home cooking will be what they need to win their first Spotlight title. They have a tough pool showdown with CIA Bounce on Saturday.

RENS: We haven’t seen a lot of this bunch but on their last visit they won the Clash Blue Division Championship. Now they will be going straight into the fire of the Orange Division.

Team DEMI: The top team from New England will be looking to make a better showing than in AC.They definitely have the talent and toughness to make some noise.

Playaz: This will be PBC Spotlight debut and I'm anxious to see them rock. I heard they have some serious talent and they will need it to get the job done.

RJS: The South Jersey boys won the Blue Division at the AC Showcase. Now they will test their skills against he best of the best.
Posted by basketball spotlight at 8:42 AM