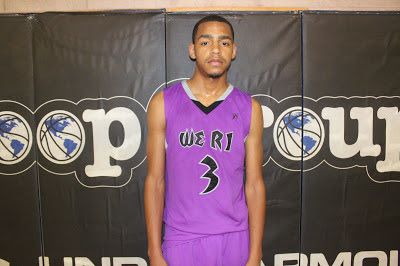 Eric Ayala Guard (WE R 1)- Ayala tops our list because his play led his squad through a rugged pool and into the final four. Eric rocked defenders to sleep with his crossover moves and change of direction ability. Once he got loose he either drained a jumper or finished strong at the tin. He could have been voted as the top performer of the weekend. Easy made things look for simple this weekend.

Nate Pierre Louis Guard (Metro Flyers)- This kid also went out in a bang in his final Spotlight appearance. His placed this new team on his back and carried them into the championship game. He scored the ball everyway imagined and showed improvement in setting up teammates. It was really a joy to watch him the last few years and he will be missed greatly.

Jaecee Martin Guard (CBC)- “Mayweather” also went out of the MDC with a bang. It was only right that he and Pierre-Louis tangle one more time for old time sake. Martin fought hard to get his team the victory with vicious drives and tough finishes. It’s virtually unstoppable when attacking in the open floor. It’s unfair for a defender to try and contain him while back peddling.

Patrick Stryzala Forward (Team IZOD)- As posted under his video Patrick had a huge weekend at the MDC. He averaged 21 points again including a game high 23 -markers in their 2 point loss to WE R 1. His versatility was very apparent and once he got flowing he was tough to contain.

Mike Burnett Guard (New Heights)- Burnett once again had a consistent weekend. This guard has the fundamentals and poise that will make many high school coaches very happy. He plays both ends of the floor while scoring from all three levels. I like his size for his position and look forward to reading about him on the high school level.

David Beatty Guard (PYO)- Beatty is a true warriors when he is flowing. He had his best game against the Playaz Basketball Club while going for 20 points in the loss. I look for him to take Philly high school scheme by storm beginning next season.

Leondre Washington Guard (Playaz)- Washington had a good outing this weekend. Not only did he run the point but also showed range on his jump shot and ability to score. This extra year of experience has benefitted him well before playing on the high school level.

Stay tuned as we bring you more top performers, highlights and recaps from the MDC.
Posted by basketball spotlight at 1:39 PM