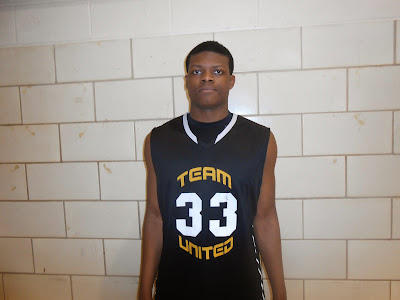 The CP 3 Invitational kicked off today and Basketball Spotlight in the building. We caught a couple of 8th Grade games and these are the players that impressed us.

Stephon Wynn Forward (Team United)
Wynn was the most productive player we saw with Team United. He came off the bench and went straight to work on the blocks. Stephon isn't very long but his linebacker frame helped him carve up space on the blocks. When he received the rock he used a feathery touch and good footwork to punish Garner Road. Wynn doesn’t waste time trying to dance around the perimeter he understands that his bread is buttered in the paint.


Qon Murphy Guard (Team United)
Murphy trimmed up a little which helps his quickness and shot up a couple of inches. What remains the same is the versatility he has that allows him to score in many ways. He enjoys attacking the hole and initiating the contact before finishing. He spends a lot of time at the charity stripe therefore he needs to upgrade his free throw shooting accuracy.

Foster Bridges Guard (Team United)
Bridges is a sniper from the perimeter and showed it early by banging home some early treys. When the defense bites on the penetration he can be seen floating to the corner and waiting for the rock. His release is very quick and he has the size to shoot over most defenders.

Rechon Black Guard (CB Spiders)
Black looks to be closer to 6’3 nowadays and relishes the point guard role. He looked good running the 1-4 set while breaking down the defenders and dishing the rock. When he didn’t feel the need to shake the defender his size allowed him to just make the simple pass over the top. He has a bright future at this position.

DJ Little Guard (CB Spiders)
This combo guard is wired to score for the Spiders. He packs a powerful drive and difficult to contain from busting through the lane. Little is also an intimidating force on defense by bullying ball handlers and forcing them to turn over the rock. I was impressed with his play.

Yancey Hairston Forward (CB Spiders)
Hairston doesn’t possess many post moves but he understands that he needs to get deep post position and kiss the ball off the glass. His inside play kept the Runnin Rebels honest on defense.

Lamont Smith Guard (NC Runnin Rebels)
Smith started the game versus the Spiders with a spark. He’s a physical guard that throws his body around when attacking the rim and his capable of launching the deep bomb. When shot blockers attempt to contest his shot he shields them with a strong frame before converting. Kid has a lot of swag.

Jaden Gardner Forward (NC Runnin Rebels)
Gardner played with a lot of energy. He played very active inside on both ends of the floor. Gardner used his quick leaping ability to keep the ball alive for his teammates. On offense he is still developing moves but has some effect in the scoring column.

Jarren McCallister Guard (Garner Road)
McCallister attacks the rim relentlessly. He can score in the half court set or in transition. He does need to develop a mid-range game to protect his body from hitting the floor so much. He has good lead guard potential.

Jeremy Robinson Forward (Garner Road)
Robinson is a long lefty that scored many buckets in their loss to Team United. He finished after tough drives to the hole and hit a couple of outside jumpers. Once he adds strength it will help him stay tall instead on bending down to gather himself before finishing.

Matt McClung Guard (Garner Road)
Matt is a smart guard that knows his way around the floor. He’s small but has a good basketball IQ that allows him to use the floater or let his shot go at the right time.
Posted by basketball spotlight at 2:50 PM