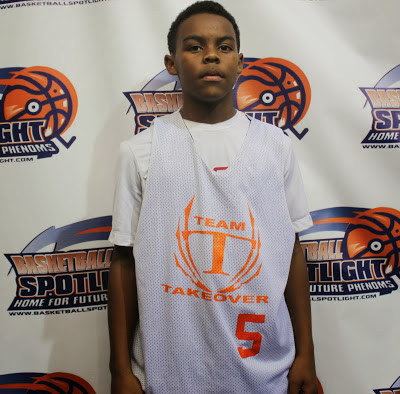 Donovan Toatley PG – Team Takeover
Toatley had another solid weekend. He’s not has flashy as in the past but he’s very efficient and takes care of the rock. I love how he’s showing maturity when staying within the offense and picking his spots to score. He plays well when running the point or off the ball when Tre’ Wood has the controls. He was very effective in their mercy rule victory over MB 1.

Myles Dread F- Team Takeover
Dread is one of the smartest players around because he understands his limitations therefore he uses his brains to make plays. One of the most glaring aspects of his game is his passing ability. He hit cutting teammates in stride and understands how to feed the post. To become a legit wing he still must continue his ball handling development and stretch his range on the perimeter.

Tre’ Wood G- Team Takeover
Wood had to be the best on ball defender I saw in Maryland. His ball pressure made several ball handlers give up their dribble. On offense he’s a slasher and scores best in transition. When he controls the rock he has penetration ability but sometimes drives too deep into the defense. We expect his game to expand once he reaches high school.

Charles Pride WG – Gym Ratz
Pride had his scoring hand going throughout the tournament which helped his team advance to the quarterfinals after victories over Virginia Panthers and Baltimore Showtime. He tried to put the team on his back in their tough loss to eventual champion Baltimore Elite. Pride continues to go at all competition and put up his numbers.

Will Reed G- B’More Finest
Will is the go to man for this club. The combo guard has the body type of long time Baltimore legend Michael Lloyd and the scoring mentality to go with it. His displayed big time body control when shielding shot blockers and spent a lot of time at the charity stripe. He’s a physical guard.

Ju Ju Hooks G 6th Man Warriors (DE)
Hooks has been scoring defenders for years and the DMV Takeover was no exception. He’s hard to contain because he can put the ball in the hole from so many different areas. His main weapon is his driving floater and ability to finish in transition. I also like the way he has been developing his point guard skills. He helped the Delaware version of the 6th Man Warriors reach the final four.

Davione Robinson G 6th Man Warriors (DE)
Speaking of scoring Davione Robinson brought his game for the Delaware boys. The high flying guard led the team in scoring in route of them making to the semifinals. He teams with Hooks to give this Delaware squad a good 1-2 punch.

Devon Dotson PG MB 1
Dotson has grown a couple of inches since I saw him with the CB Spiders. His game has matured because he doesn’t believe in attacking full speed every play, now he picks his spots and conserves energy for later in the game. He still prefers going to the right side of the floor but can change direction when the defense catches on. He had a decent weekend.

Mika Adams-Woods PG-
Gym Ratz After dancing through the first two games Adams-Woods had a tough time while getting swarmed by a ton of quick Takeover guards. The slick lefty then shook off that outing and rebounded with a good showing against Baltimore Elite. He’s also a big time gamer.

Vand Worthy WG MB 1
Worthy was worth the price of admissions. He has a very quick crossover move which allows him to thrust through the lane. Once he gets inside he can score over the defense or drop a nice no look pass. This ultra-quick guard just imposes his will on the defense. He also had to be one of the most athletic guards in the building. Look forward to seeing him again soon.

Tyler Williams WG MB 1
Williams is another talented wing guard for this Carolina bunch. He excels in transition and showed off his multi-dimensional game. He even gave me a taste of his post up skills. He teams well with Worthy and Dotson to make a credible backcourt.

DeVandre Edmonds F – Mass Shooting Stars
This was the best I’ve seen Edmonds play this season. He was a good target near the free throw line and was able to maneuver into a few buckets. I was really impressed with his aggression once he touched the pill and looked for his offense. He needs to continue down this path.


Jose Lara F-Mass Shooting Stars
Lara is an energy player for the New England squad. His number isn’t called much on the offensive end but he makes the most of his minutes by banging, snatching boards and playing defense. He also caught a rim rocking dunk that drove the crowd crazy.
Posted by basketball spotlight at 12:44 PM