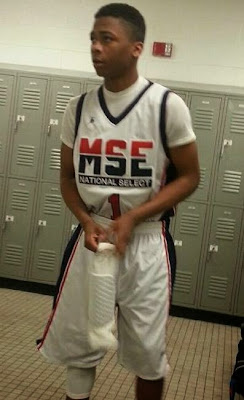 Jordan Toles Left The DMV Takeover As The Best Prospect

The 6th Grade Division featured some future big time players. Here’s our look at the Best of The Best from the DMV Takeover.

Best Prospect - Jordan Toles, MSE National Select
Yes this was my first time watching Toles and he made me into a believer. He came into the DMV with a national rep and showed he was worthy of the praise. He has the chance to be a big time prospect.

Best Performer- Ishmael Leggett, Team Takeover (Black)
Leggett got it done all weekend and his team left with the crown, so it’s only right that he gets top billing. The kid is a bona-fide player for real.

Best Shooter – Justin Lykes, Team Takeover (Black)
Lykes outside shooting in the finals sealed the deal on this category. Even when he missed the crowd thought it was going in. The kid has a ratchet.

Best Playmaker- Zion Harmon, MSE National Select
Yes he turned it up in this age group also. His play making skills had this all-star squad in the finals. He’s not named Zion “The Lion” for nothing.

Best Defender- Montez McNeil, MSE National Select
The intimidating force inside had scorers altering their shots all weekend. He’s a big road block in the paint.

Best Passer- Canin Reynolds, Team Takeover (Black)
The table setter for the champions made things easy for his group of scorers. His job is to keep everyone happy and he delivered this weekend.

Best Game: Team Takeover (Black) vs. MSE National Select
The small but packed court made the atmosphere for this match up stand out. Both coaches were barking and the kids responding with great play on the court. This battle was reminiscent of many great Spotlight showdowns of the past.