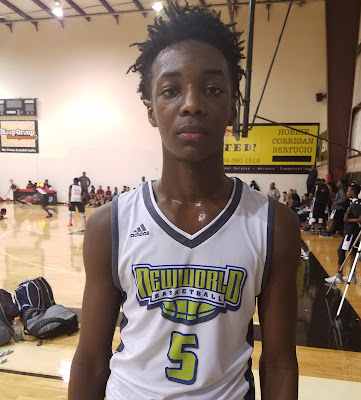 Every year the “Spotlight” boasts a competitive tournament series where teams set out to be the next team that tries to embark on an undefeated season. The series always starts in early December with the Tip Off Classic where many teams start their season and coaches are always curious how their teams will gel and perform. This year’s 8th Grade Orange division was packed with elite level teams and many already known national players. New World who is a newly sponsored Adidas Gauntlet team as of last year out of the DMV showed why they can be regarded as one of the nation’s elite teams as last weekend they went undefeated and brought home the championship banner at the “Spotlight” in Neptune, NJ beating many’s pre-season #1 team in the country Team Rio National by a score of 51-41. New World also beat the NY Rens and Team Final in pool play and then went on to beat the PSA Cardinals in the quarters and Milbank in the Semi. Let’s meet the Top Performers for New World.

Julius Ellerbe Forward (New World) – Standing 6’5 Ellerbe is an athletic wing forward that has some point guard instincts. He has an enormous upside and can be considered a Top 10 prospect in the country. Julius is a five category contributor that also can defend multiple positions. A very versatile and unselfish player that always seems to make the right play finished with 11 points including three 3 pointers in the championship. 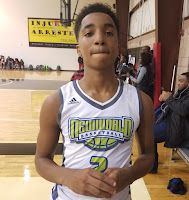 Bray Freeman Guard (New World) – Freeman is a nice size combo guard that really knows how to score the ball. He can score from all three levels and understands how to take what the defense gives him. I like his ability to attack the seams of the defense and get to the rim and finish around bigger defenders using crafty finishes. Brey also has a nice stroke out to the 3 point line and is a capable defender. He finished with a game high 14 points in the championship. 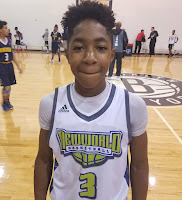 Elijah Hawkins Guard (New World) – The “Lil Genius” has to be considered one of the top true PG’s in the country. Many will question his size but this kid has heart, is tough as nails, and has a high basketball IQ and feel for the game. Elijah is always probing the defense and very rarely gets himself in trouble spots on the court. He can knock down the open 3 pointer and has a nice floater in the lane. With elite level handles he pushes the rock from foul line to foul line setting up his teammates for easy buckets. He finished with 10 points including two 3 pointers in the championship. 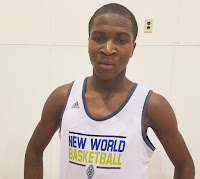 Ariel Goddot Forward (New World) – Goddot plays the power forward for his New World team and does a very good job at it. He catches the ball at the high post and attacks the rim with vengeance. He is a great rounder as he cleans the backboards in a Dennis Rodman fashion. He finished with 21 points in their quarterfinal win over the PSA Cardinals and had 8 points in the championship. 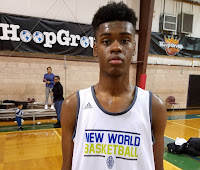 Ya’Qin Staton Forward (New World) – Staton is a long wing forward that hasn’t even scratched the surface of his potential. On his team he is the guy that you don’t account for and he always makes you pay. He is good in transition and can knock down his jump shot with range out to the 3 point line. Ya’Qin can guard multiple positions and also rebounds well. He finished with 8 points in the championship.
Posted by basketball spotlight at 7:23 AM