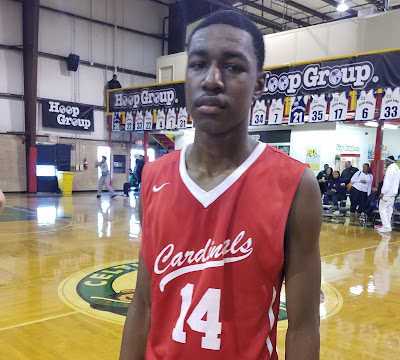 The Basketball Spotlight Tip Off Classic 8th Grade Division was loaded with national and regional talent. Here’s our Part 4 of our Top Performers at Neptune, NJ.

Drissa Traore Forward (PSA Cardinals) – Traore is a long combo forward that stands about 6’8. He has a high motor and good athleticism. He is all over the floor and seems to always be around the ball. Right now he is developing on the offensive end but is really good on the defensive end as he was probably the best rebounders we saw over the weekend. We saw one play where he grabbed a miss off the glass, pushed the rock himself and made a long one handed bounce pass for an assist. Drissa finished with 15 points in the game we watched against Canada Elite. 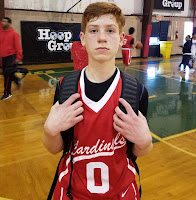 Aidan Rogers Guard (PSA Cardinals) – This kid is a solid heady point guard that makes his teammates better. Aiden gets off the ball at the right times and advances it up the court with the pass. He moves the defense with his eyes and uses good angles to make nice passes for assists. Rogers also has a nice stroke for behind the 3 point line so he can knock down the open shot as we saw in the game we watched. 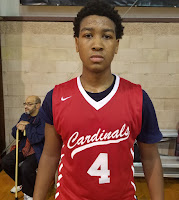 Daniel Nixon Guard (PSA Cardinals) – Nixon is a big strong wing guard standing about 6’4 and already pretty skilled offensively. He projects already to the college level due to his size and frame. We saw him knock down the 3 ball and he is also a bull going to the basket. Daniel can guard multiple positions and rebounds his position pretty well. He score 11 points against New World. 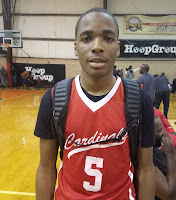 Jalen Hammond Guard (PSA Cardinals) – Jalen is a combo guard that prides himself on locking up on defense. We saw him get steal after steal and finish with either hand in transition. His in your face style on the defensive end sets the tone for his team and makes it tough on the opposing point guard. He has a good demeanor and seems to be a leader on his team. Hammond had 13 against Expressions and 16 points versus Canada Elite. 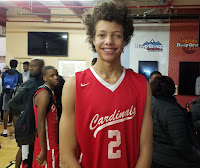 Micawber Etienne Forward (PSA Cardinals) – Standing at about 6’9 Micaber was one of the New Faces that surprised us. He rebounds the ball really good and outlets the ball down the court starting the break. Micaber has a nice stroke from the FT line and is a good passer. We feel with continued development he will be playing college ball down the road. 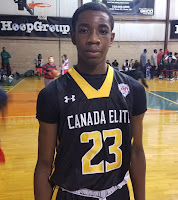 Kyle Duke Guard (Canada Elite) – Duke is a do it all guard point guard for his Canadian team. He can get anywhere on the court anytime he wants. He understands as a point guard if he gets into the paint it breaks down the defense and he will make you pay by finishing himself, getting fouled or passing to a teammate for an open shot. Kyle can also knock down the 3 ball as he hit 4 of them in the game we watched. He finished with 23 points in the game we watched. 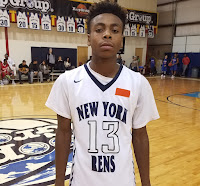 Tyreck Morris Guard (NY Rens) – Morris is a long guard that is one of the primary scorers for his team. He has a nice pull up off the bounce and a quick first step when he is looking to attack the seams of the defense and get to the rack. We also saw him rebound his position well as one play and got a rebound put back and 1. Tyreck finished with 14 points in the game we watched. 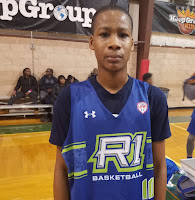 Jameel Brown Guard (We R 1) – Brown is another long guard that is always in attack mode. He can score in a variety of ways but is very effective from behind the 3 point line as in the game we watched he hit four of them. Jameel fits well in the up and down style of play that his team plays. He scored a game high 20 points against Team Rio.
Posted by basketball spotlight at 11:20 AM