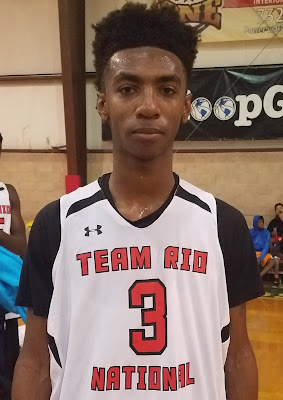 In Part 2 of our 8th Top Performers at the Tip Off Classic we take a look at Team RIO National crew. Here are the players that impressed us in Neptune, NJ.

Trey Patterson Forward (Team Rio National) – At 6’8 and with a few more inches to grow Patterson is considered by many to be the top prospect in the 2021 class. In our eyes he projects to be a stretch 4 man and the scary part is that he still is only scratching the surface of his potential. You can tell he has been working as his jumper is looking smooth with range out to the 3 point line and he has above average ball handling skills. Trey dropped 22 points including three 3 pointers in their semifinal win against Expressions and 15 points against We R 1 in the quarterfinal. 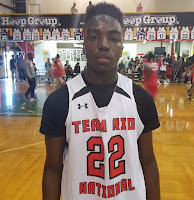 Noah Harris Guard (Team Rio National) – Harris was one of the Fresh Faces that emerged at the Tip Off Classic. He runs the point for his high powered Rio team and does it very efficiently. He does a great job distributing to the ball to all his weapons around him, plays good on ball defense, and can knock down the open jumper especially from the 3 point line. Noah finished with a game high 28 points including eight 3 pointers against Expressions the semifinal. 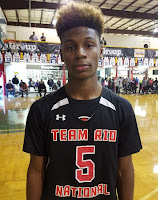 Tristan Jeffries Forward (Team Rio National) – Jeffries is a strong well-built wing forward that has a quiet demeanor and plays the game the right way. He takes advantage of his opportunities on the offensive end and plays solid defense while rebounding his position at a high level. Tristan finished with a team high 9 points in the championship loss to New World and 10 points against We R 1 in the quarterfinals. 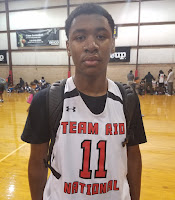 Shane Dezonie Guard (Team Rio National) – Shane has grown a few inches and added some bulk to his frame from last year. From the Wing Guard position he can score from all three levels but is at his best when attacking the rim either in the half court or in transition. Dezonie can absorb contact and finish with either hand. He finished with 13 points against We R 1. 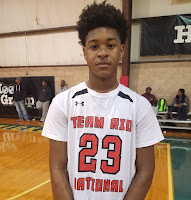 Jayden Brown Guard (Team Rio National) – Brown is a strong guard that does whatever his team needs him to do in order to win. He can guard multiple positions on the perimeter and offensively he can act as the lead guard or move to the wing and become a scorer. He has a nice pullup jumper off the dribble. Jayden finished with 8 points in the championship loss to New World.
Posted by basketball spotlight at 10:59 AM