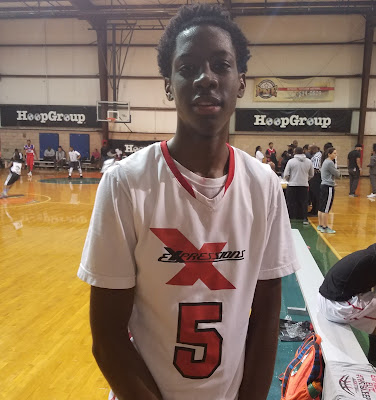 The Basketball Spotlight 8th Grade Tip Off Classic had some of the top players in the country. Here’s Part 2 of our Top performers from Neptune, NJ.

Terrence Clarke Forward (Expressions) – When we first saw this kid last year we thought he was really good. Fast forward one year later we are talking about a wing forward standing 6’6 that looks like he might grow a few more inches with an elite level skill set. Clarke has to be in the conversation as a Top 5 player in the Class of 2021. He can score from all three levels with range well beyond the 3 point line and has above average ball handling and passing skills as he has the ability to play the point forward. Terrence lets the game come to him not forcing the action but thrives in transition using his athleticism to finish with dunks. He finished with 11 points against Team Rio, 16 points against Team Final, and 19 points against PSA Cardinals. This kid has all the tools. His play earned him a nickname Terrence "Total Package" Clarke. 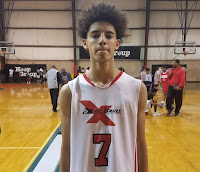 Alexis Reyes Forward (Expressions) – Right now Reyes has to play more of an inside role for his team standing 6’7 but we project him as a wing forward or stretch 4 depending on how much more he grows. Alexis has a very good skill set as we saw him handle the ball driving and kicking to open shooters, stepping out to the 3 point line knocking down the open jumper, and catching the ball at the high post driving and finishing with a floater. One play that stood out to us was when he ran the floor and glassed someone’s shot from behind. He finished with 14 points against Team Rio and 10 points against Team Final. 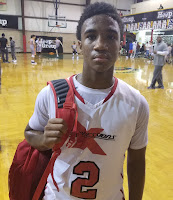 Kurt Henderson Guard (Expressions) – Henderson runs the point for his team and he puts you in the mindset of a Kemba Walker. He is a strong, quick guard that loves to score the ball with a mid-range pull up or the long range 3 ball. We noticed Kurt has great elevation on his jump shot so he can get his shot off against taller players. His athleticism also allows him to finish good at the rim either in the half court or in transition. He scored 19 points against Team Rio and 14 points against Team Final knocking down a bevy of 3 pointers over the weekend. 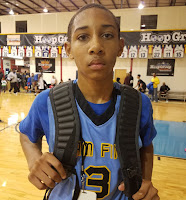 Rahsool Diggins Guard (Team Final) – Diggins is a crafty point guard that also has to carry some of the scoring load on his team. He has a good feel for the game, high IQ, and dictates pace when he has the ball in his hands. He shoots a high arching 3 pointer that often finds the bottom of the net and Rahsool also likes to finish in the lane with his floater. He finished with 16 points in the game we watched. 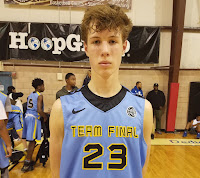 Christian Tomasco Forward (Team Final) – Christian is a 6’7 mobile big man that has nice moves in the paint. We saw him catch the ball with his back to the basket in the mid post and hit a nice turnaround jumper after faking one way and going back the other way. He can fill the lane in transition offense or clog the lane on defense. He also rebounds well and has a great demeanor. 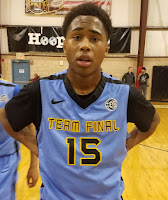 Khalil Farmer Guard (Team Final) – Farmer is a strong wing guard with nice size. He seems to be at his best attacking the basket and either converting the finish or drawing a foul and he knocks down his free throws. We also saw him make a nice pull up off the bounce coming off of a screen. He ended up with 19 points in the game we watched. 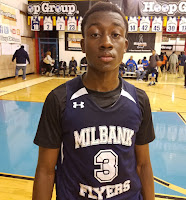 Rayvon Weir Guard (Milbank) – Milbank was the surprise team of the Final 4 and Weir was the leader of their up and down style of play. He is a fast guard that can get end to end with the best of them. Right now Rayvon is a combo guard that focuses on scoring but eventually I can see him moving more into a point guard role. He finished with 10 points against New World and 19 points against the Playaz.
Posted by basketball spotlight at 12:41 PM