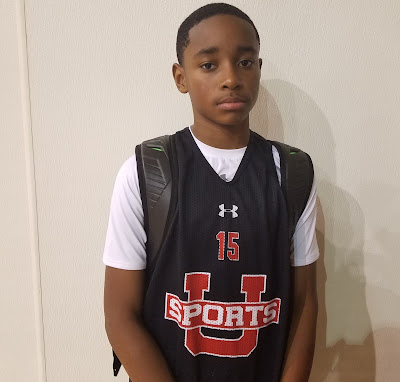 The Basketball Spotlight Tip Off Classic 6th Grade Division gave us a look into the future. Here’s Part 1 of our Top Performers from our weekend in Neptune.

Sebastian Robinson Guard (Team IZOD) – Robinson is a big combo guard that understands his role as a bucket getter on his team. He has a very high IQ and feel for the game. He can score from all three levels but is at his best in transition or attacking the rim in the half court. One thing that Sebastian does really well at this age is moves without the ball. He has a good handle which allows him to go coast to coast after grabbing boards or drive and finish in traffic in the half court. Robinson finished with 15 points in the championship and 18 points in the semifinal.

Tahaad Pettiford Guard (Team IZOD) – Pettiford is the other primary scorer on IZOD. He is a lefty point guard that has a nice stroke all the way out to the 3 point line. This kid plays with an edge and has a high motor and he seems to enjoy playing defense also. He loves to find his way to the corner and knock down the 3 pointer. He tallied 16 points in the championship and 13 points in the semifinal. 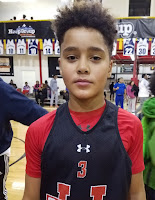 Elliott Cadeau Guard (Team IZOD) – Elliott is one of those kids that is just a player. He does what it takes to win and plays the game right. He is a floor leader that directs his team on both ends of the floor. He is not going to score a lot of points but everything he does seems to affect the game in a positive way. He has a good handle and passes very well as we saw him make a one hand full court pass after he made a steal under the basket. We also saw him make a nice cross court pass and Cadeau understands when to push the pace or slow the game down. When he shots he has a nice 3 point stroke. 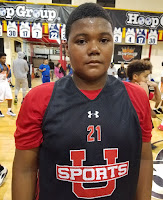 Sydir Mitchell Forward (Team IZOD) – Mitchell is a space eater forward that patrols the paint for his team. He is tough and doesn’t mind contact taking a bump and going to the line where he has a nice stroke. We saw him catch the ball in the paint take a power dribble and make a nice turnaround hook shot. Sydir had 11 points against Courtmasters in the championship. 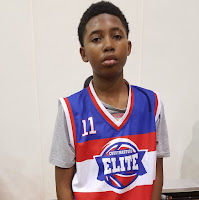 Brandon Sinclair Forward (Courtmasters Elite) – Sinclair is another long forward that doesn’t get as many opportunities offensively as his front court mate but he is very effective and plays to his strengths. He loves to work the weak side and get offensive board put backs. When he gets fouled Brandon has a nice stroke from the line. He embraces playing defense blocking shots and rebounding at a high rate. Sinclair had 11 points against Philly Triple Threat. 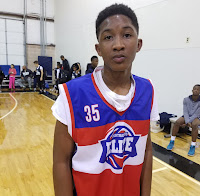 Jakari Tertulien Forward (Courtmasters Elite) – Jakari is a long athletic forward that was having his way with the other team every time we were watching. In transition he understands to rim run where he would either receive the ball for a layup or get a rebound put back. He seemed to get every rebound on both ends of the floor and his coach didn’t mind his guards throwing him the ball in the paint even when he was getting double teamed. Tuertulien was one of the better prospects in the 6th grade division. He finished with 18 points against IZOD and 30 points against Philly Triple Threat. 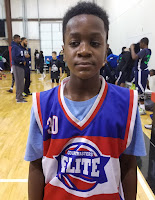 Clinton McCullum Guard (Courtmasters Elite) – Clinton is a strong combo guard that is always in attack mode. Whether he was scoring or passing, he was always putting pressure on the defense getting into to the paint. He has good handles and a nice frame that allows him to absorb contact. We saw him make a nice no look pass and also drive, spin dribble and drop off a pass to his big in traffic. When he is scoring mode McCullum is at his best attacking the basket. He scored 13 points against IZOD. 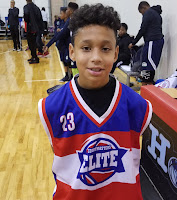 Jayden Fortes Guard (Courtmasters Elite) – Jayden is small in stature but has a big heart. He doesn’t mind sticking his nose in there on offense or defense. He is the vocal leader on both ends of the floor and he initiates the offense for his team as he plays the point guard position. He can knock down the open jumper but is more of a pass first guy.
Posted by basketball spotlight at 8:19 AM