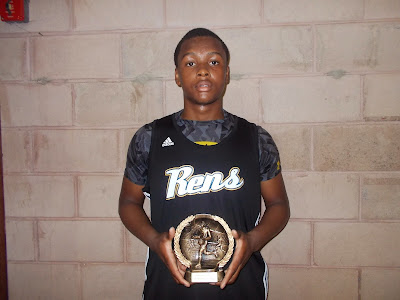 Nayshon Hamlet Finishes At The #1 Spot

The 8th Grade Division had some serious talent. Here’s our Best Of The Best list and Super 15 Player Rankings from the MDC. The player rankings are based strictly on performance.

Best Performer: Nayshon Hamlet (NY Rens)
Hamlet came in and did his all-around damage while leading his team to the Gold Ball and taking home the Mr. Memorial Day Award.

Best Playmaker: Jalen Carey (NY Rens)
This kid has mature into a natural playmaker. He a proven score that also sets up his teammates. His game is so smooth right now you have to love it.

Best Scorer: Charles Pride (Gym Rats)
Once again the Syracuse native showed his scoring prowess. He gets buckets in a big way and often. Once he gets going he's hard to slow down.

Best New Face: Corey Greer (SJ Select)
Greer brought flair and excitement to the MDC. His buzzer beater against NWK will go down in the MDC vault as one of our best moments.

Best Floor General: Antwan Butler (WE R 1)
His play at the point guided the Delaware boys to the championship game. He came into this event has the top point guard from Philly and only enhanced his rep.

Best Athlete: Nigel Marshall (NWK)
Marshall showed his leaping ability all weekend. His thunderous dunk against SJ Select went down as one of the best plays of the weekend.

Best Prospect: Cameron Reddish (Team Final)
Reddish once again showed why he’s one of the highest ranking guards in the country. His fluid motion and ability to play both guard positions helps him stand out.