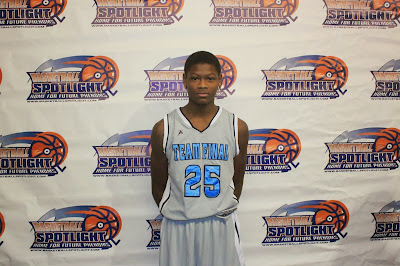 This was a very productive week in a couple different ways. Everyday this week, I worked out with a couple other ball players. We worked on strength and conditioning and then we did skill workouts with Aaron Mckie. I also started my summer reading. The first book I have to read is "Friday Night Lights", and it's pretty good so far.

This weekend was MIT, Maryland Invitational Tournament. The first three games were a breeze including a dunkfest game. My teammate, Andrew Sims, had a dunk early in the game and so did I. Then later on in the game, I got another dunk and so did my teammate Justin Anderson. Then we played Jersey Shore Warriors; the game was back and forth throughout the entire game. Near the end of the game, we were down by three with three seconds left. One of my teammates came and screened for me and I got open. A defender was in front of me, so I went towards him, stepped back and hit the three at the buzzer to put the game into overtime. In overtime, the score was close but they made free throws and some crucial rebounds. We ended up losing the game by two. Other than that loss to a team we should have beaten, the week was fun and productive.