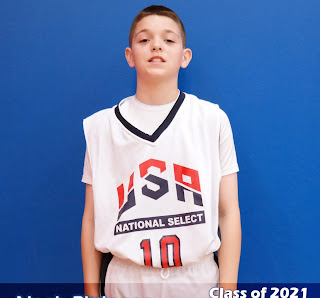 Noah Rittinger is an athletic point guard that competes on both ends of the floor. Noah is figuring out to be equally as effective and is adding new aspects to his game each time we see him. He is now catching and shooting while also exhibiting a two dribble pull-up that is very impressive. With such a wonderful shooting touch, one on one skills and great court vision there’s no coach is going to be able to resist playing him as a primary scorer in addition to his lead guard role. He pushes the ball on the break and has good breakaway speed with the ball in his hands – this is where he excels.

Rittinger is from West Virginia, plays for All-Ohio Red and is currently rated as a top 10 player nationally. His team has some of the best players in the country on it (Seth Wilson, Anton Hameed) in addition to Noah and will be vying for a national championship in their age group. Noah has earned this ranking throughout the country by attending the top exposure camps in the country and proving it time and time again on the court. Of course Noah will be at the Bball Spotlight Future Phenom camp Aug 23rd & 24th representing his position as one of the top players in the country in his class of 2021.


Click Here If You Have Game!
Posted by basketball spotlight at 12:43 PM