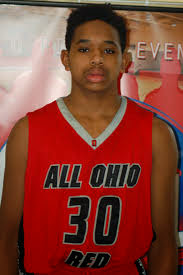 Let’s analysis this; the AAU power ranking indicate that the largest concentration of top level teams in the country played collectively in the NYBL – Jeremiah Francis played in this league. All Ohio Red has played a national schedule going undefeated in the NYBL and undefeated in all of 2014; again Jeremiah Francis was the PG for that team. In the NYBL Championship Session 4, Francis faced off against the Langley Twins, Tyler Brelsford, and Justin Moore top players in their class and came out on top; claiming the NYBL Championship for the second year in a row defeating the current and reigning national champion CP3 Rising Stars.

Francis is the starting PG on the best team (All Ohio Red), playing in the best league (NYBL), against the best competition ~ he runs the show keeping his teammates happy making plays for himself and others. Doing his most impressive work in crucial moments of the closest games – Francis is a physically imposing point with true instincts for the game. The son of coach who has coached at the D1 level Francis has been taught the game on the highest plane. He has a great motor and plays in attack mode on the offensive end of the floor on every possession. He can get to the rim at will on the break. He is terrific off the dribble where he is happy to turn and back down smaller guards or shoot over them. He is creative offensively; with his ability to play at different speeds and score effectively against man, zone and in the mid-range area. The 3-point shot has been there but the range is expanding at a very steady pace.

The reality is that All Ohio Red has had a target on their backs the entire season and has absorbed every team’s best effort; the NYBL Championship Run was proof of where they are as a team and has acted as a singular step in their bigger plan of winning this year’s national championship. The NYBL is where the best teams and best players play; the AOR Coaching Staff feels that they are ready for the challenge and better for having played there.

With respect to Jeremiah Francis; after he finishes chasing a 2014 national championship you can find him August 23rd & 24th at the Bball Spotlight Future Phenom Camp where he will be looking to claim another title as the best PG in 2019; just in case he hasn’t done enough already to prove that.

Posted by basketball spotlight at 7:14 PM