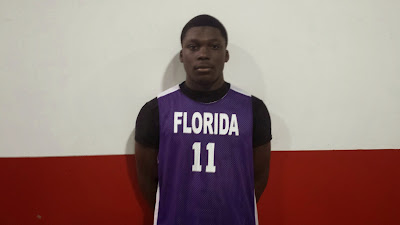 The face of Team Florida being NYBL and possible National Championship contender falls on the broad shoulders of one of the toughest, hardnosed perimeter players in the country, Bryan Sanders. Sanders was one of the top performers in the NYBL the entire season. As one of the most reliable and consistence scorers in the league Bryan used his size, strength and mature game to make a difference game after game. A very quiet player both on the court and off, he leads by example with his work ethic and skill set. Many may questions about how close he is to his ceiling in comparison to other prospects. After being a remarkably consistent performer throughout the NYBL playoffs Bryan Sanders must get his just due as his skill set translates into him being a game changing factor at the 8th grade level and beyond – it’s tough earning recognition when your teammate stands 6’9; but Sanders has earned it on the court, flat out and period.

Saunders primarily operates the lead guard position for team Florida but he can play all three perimeter positions during a game. He has a great frame and is an explosively powerful athlete, especially in the open court. He is a highly competitive player who can affect the game on multiple levels. Whether it's rebounding in traffic, facilitating the offense, or acting as the team’s primary offensive scorer or shooter he gets the job done providing his team with what they need. Bryan has phenomenal physical strength for a young guard, he competes and really does a great job using his frame and anticipation on the defensive end to come up with steals, rebounds, and stops on smaller quicker guards. He slashes and finishes well in the paint with great touch and body control. Can hit the open three when in a groove and has developed a solid pull-up mid-range package since we say him in Session I.

It is easy to look at the front of the brochure and evaluate established talent, finding great players of the future that earns it play after play and possession after possession is what makes watching this game at the youth level special. Sanders is a special player who has had a special season, the NYBL is no bigger stage in which to prove such on ~ unequivocally he has done just that, Team Florida and the NYBL have a humble workhorse/superstar on their hands in Bryan Sanders.


Click Here If You Have Game!
Posted by basketball spotlight at 8:20 AM