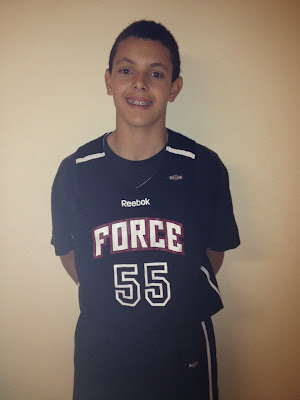 Each year the Basketball Spotlight MDC is known to produce a fresh face and this year a new player the starred on the stage was 7th Grade Guard Alexander Rice of Jersey Force. Alexander is the son of former North Carolina point guard and current Monmouth University head coach King Rice. During the MDC Rice had to make his father proud as he put up tremendous numbers while averaging over 20 points a contest. Jersey Force’s director Joe Stein loves having Rice as a part of his program and raves about his ability. “Alex has the unique ability to get teammates involved from the point guard position but understands when it’s time for him to get a bucket on his own” said Stein.

Since Rice is coming from a basketball bloodline the expectations for his success have been huge. But Stein has been in the game a while and is confident this youngster will remain focused and should meet the challenges down the road. “Alex is a humble kid so I know he will remain level headed. In terms of potential I think when you look at his work ethic, basketball IQ and pedigree he should be a great floor general for years to come” he finished.


Click Here If You Have Game!
Posted by basketball spotlight at 8:24 AM