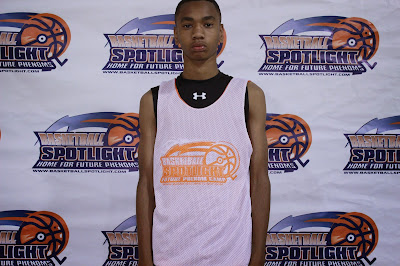 Keyshawn Johnson Guard (Maryland)- A registration class error is the only reason this kid wasn’t in the Top 20 game. He was very dominant from the start of the camp playing both guard positions. His crossover dribble sets up most of his moves. He then gives a shooting touch and form from the perimeter while displaying a tight handle. I like the size he has for the position and seems to have a good work ethic that could equate to a high profile prospect down the road. This kid definitely made a name for himself.

Cameron Byers Forward (Maryland)- Byers is another talented forward from this loaded DMV area. He’s a physical inside force with the touch of a wing player. He doesn’t mind banging on the boards and charging the lane like a mack truck. As he moves forward in his progress his skill set will need to continue to develop which is natural for a post player this age. He’s an instant impact player when he steps on the floor.

Tristan Maxwell Forward (North Carolina)- The Carolina product can be really labeled as a big guard because of his skill set. He makes it his business to finish off plays in transition while demonstrating great body control. He has the enact ability to change his shot in mid-air which throws off shot blockers. I also saw him show off his handle by splitting the defense and throwing a no look pass. His toughness can never be questioned being the son of former NBA great Vernon "Mad Max" Maxwell. Keep an eye on this kid.

Jalen Cone Guard (North Carolina)- Cone is another NC product with a mean ratchet. He had one of the best strokes in the class. But as soon as you label him as a spot up shooter Cone will drop it on the deck and blow right past a defender. When the weekend was done I was convinced he was a three level capable scorer.

Tarik Booker Forward (Indiana)- Booker is a huge space eater that’s moves defenders easy on the post before scoring. He also wanders out to 3 point land and won’t hesitate to launch a jumper from there. He is very light on his feet for his size and should trim up before reaching high school. The heartland of basketball has another good prospect on the horizon.

Timmy Anderson Guard (Nevada)- Anderson is built like a full back but has the poise and feel for the game as a point guard. While some players are overly aggressive and selfish in this setting Anderson lets the game come to him while surveying the floor. He should be a name you look out for on the West Coast.

Tejon Ford Guard (Maryland)- The speedster with the rock is an instant playmaker. He spent the weekend blowing past defenders especially in transition. Some other guards in the DMV get more attention than this kid but he’s not one to be slept on. They say speed kills and this kid has plenty of it.
Posted by basketball spotlight at 2:04 PM