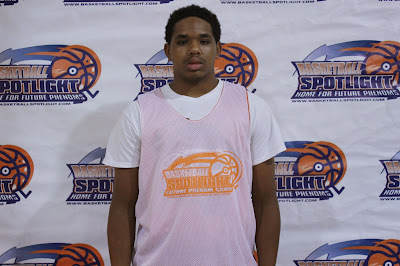 Jeremiah Francis Made His Spotlight Debut

The Inaugural Basketball Spotlight Future Phenom Camp opened this weekend at the New 24 Facility in District Heights, MD. This event had loads of talent especially in the Class Of 2019. Next we will take a look at some of the top players from around the country that made their Spotlight debut.

Jeremiah Francis Guard (Ohio)- Francis has a national name so he decided to let the East Coast see his skills and delivered. When he is rocking with his All Ohio Red squad Francis’s job is to set up teammates and run the show but in this event he let his hair down a little. The imposing guard still drop dimes for time to time but he also looked to score the rock himself. He gave the crowd a taste of his slick ball handling including crossovers and spin moves which resulted in buckets. He used that massive frame to absorb the contact and still finish. He’s all around showing earned him the Playmaker of the Camp Award.

Dale Hewitt Forward (Canada)- Hewitt is a certified leaper that gets out on the break. He runs the lanes well and will go up top and bang home a dunk like he did in one of his contest. I like his speed on the perimeter and his willingness to go hard at the tin. This kids motor alone will take him a long way. Could be another high flyer from north of the border.

Tajay Martin Forward (Canada)- Martin is built like a linebacker but has enough versatility to attack the hole off the bounce. He loves driving hard right and using the floater or finishing through contact at the tin. He’s another good performer in a long list of ballers from north of the border. Martin’s play launched him into the Top 20 All Star Game.


Christian Nguyen Guard (Virginia)- This Virginia guard is in full gear once he got the rock. He pushed the rock up the floor with a hurry with his head up looking for teammates. One thing to his credit is that he still has the presence of mind to survey the floor and slow things down if necessary. I don’t know how many other scouts noticed his play but he caught our attention at the Future Phenom Camp.

Eric Dixon Forward (Pennsylvania)- The big forward impressed us his play on the blocks. He played with a high motor while getting good post position and scoring. He will be a player that we are keeping our eye going into next season.

Chris Ings Guard (Pennsylvania)- Ings played on a squad with some aggressive guards but still managed to make his presence felt. I like how he attacked the basket and also played off the ball. He’s young so his body is still developing but once he’s finished product he should be one of the next upcoming Philly guard.
Posted by basketball spotlight at 11:46 AM