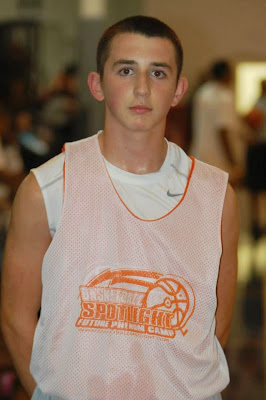 The Basketball Spotlight Future Phenom cam was loaded with talent especially in the Class of 2019. The rising 8th Graders featured several top players and here’s Part 2 of the players that have been featured on our website in the past.

Rob Higgins Guard (New Jersey)- Higgins a true Spotlight veteran and the Jersey Force product surprised the field with his play. He has the little bot next door look but that’s the calm before the storm. Once Higgins starts attacking he gives you a flurry of creative moves, passes and buckets in a hurry. He play caught the eye of several scouts in the building and launched him into the Top 20 All Star Game.

Mark Bradshaw Guard (Pennsylvania)- I have to start off by saying welcome back Mr. Bardshaw. He had his confidence flowing in the scoring column and used supreme body control. He jump shot was falling and he showed more creative control off the bounce. The stage was big and the competition was thick but Bradshaw came out swinging. The southpaw was on his game. He teamed with Marquise Walker to form one of the best back courts at the camp.

Che Evans Forward (Maryland)- Evans passes the look contest as an intriguing prospect. But on this weekend he let his game do the talking. The lanky forward can get it done creating in the mid-range and finishing at the tin. He also can step back past the 3 point line and knock it down. Don’t be surprised if he game and name explodes nationally next season.

Kasim Tolliver Guard (Pennsylvania)- The game I watched Tolliver was a blood hound on defense. He forced the opposing point guard to turn over the pill and used it to capitalize for his team. He still attempts to control the tempo of the game which his difficult in this environment.


Jaheim Tanksley Guard (New Jersey)- I was a little nervous to see Tanksley bang because I haven’t seen him play against this level of competition in a while. But I must say the Garden State floor general once known as the “Chosen One” was ready to rumble. Jaheim secret to his success was his quick first step when driving. He blew past several defenders and left them watching as he entered the land of giants. Once he got inside he used his basketball IQ to make the right play. He’s learned not to over penetrate or force the action too much.

Mahkel Mitchell Forward (Maryland)- Mahkel has settled down in a post a little more lately which fits his game. I like his maneuvering in the paint and shot making skills when facing the basket. On defense he locate shots well in terms of getting blocks and grabbing boards. I think his next step must be wanting to bang a little more with the opposition.

Jamil Riggins Forward (Pennsylvania)-The high flying lefty lives for the dynamic finish. Therefore he thrives in the open floor and in transition. He does need to pick his spots a little better and develop his ball handling skills on the perimeter. Right now he’s a good energy guy to have on your roster.

Shermick Lofton Forward (Pennsylvania)- Every event needs a little heat and this kid Lofton loves to explode on the floor. He has Jamal Mashburn type build, still a little raw but has a good motor. He plays with fire that can be looked at as confrontational but he seems like he’s trying to raise the level of play of his teammates. He’s another player that might appear on the radar this coming season.
Posted by basketball spotlight at 7:40 PM