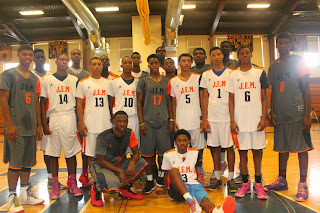 In the highest scoring J.E.M. All Star Classic ever the North Team defeated the South team 127-101. This game featured some of the best players in the country and was a huge success. Here are our top performers beginning with the North Squad.

MVP: Aaron Clarke Guard (Parsippany, NJ)- Clarke started the game of draining a trey and that was a just a preview of what to come. He went on to knock down 5 more treys while leading his team to the victory. Along with stroking the pill Clarke also showed the ability to set up teammates and setting the tempo. He has made the transition to the point guard spot.

Armoni Sexton Forward (Paterson, NJ)- Sexton had an argument for MVP as he played an outstanding game. He ran the floor like a deer while catching a few lobs for dunks and finishing easy in transition. On the defensive side he was a ball hawk and tenacious rebounder. The “Live Wire” motor is something serious and will help him catch major attention in high school.

Jahvon Quinerly Guard (Englewood, NJ)- “Inferno” made things look very easy once again in the scoring column. He gave us a combination of deep bombs and mid-range pull ups. His fluid handle and confidence with the pill makes you love his game. Hudson Catholic got a great grab with this kid. They have one of the best combo guards in America.

Nazi Reid Forward (Asbury Park, NJ)- The #1 prospect in the region left Basketball Spotlight in impressive fashion. He gave us a taste of his improved ball handling and passing. He also ran the floor well while also finishing above the rim. He’s an intimidating force and he showed it in this event. This kid has the chance to be someone very special down the road. The loaded Roselle Catholic just got richer with the arrival of Reid.

Atiba Taylor Guard (Hackensack, NJ)- Taylor enjoyed the atmosphere while dropping dimes to some of the best players in the country. He gave us some of his playground skills while displaying a tricky handle and no look passes. He has been one of the most tested point guards throughout his Spotlight career. Everyone in the country knows this kid.

Justin Winston Forward (Bloomfield, NJ)- Winston was another piece of this loaded North squad. He showed his face up game and finishing ability in transition. I like how he plays hard on both ends of the floor and shows great potential when on the floor. He also had a great Basketball Spotlight career.

Charles Pride Guard (Syracuse, NY)- Pride is just born to score the basketball and he showed that Saturday. Whether it was a lay-up in transition or a follow up after grabbing a rebound. He continues to grow physically and now his confidence is through the roof. He was one of the best pure scorers to come through Basketball Spotlight. Please keep an eye on this kid.

Mike Adams-Woods Guard (Syracuse, NY)- Rounding out the North Squad was Adams-Woods. The lefty was great pushing the rock up and down the floor and showing the passing skills that can make him special. He has the enact ability to make everyone around him better. It was a joy to watch him these last two years.
Posted by basketball spotlight at 11:51 AM