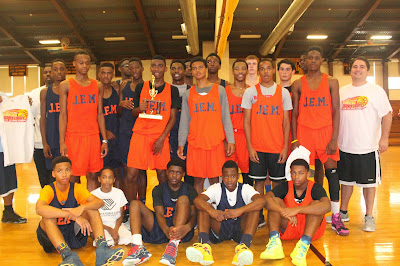 Tavon Jones scored at the buzzer as the Orange Team defeated the Blue Team 73-72 in the Garden State Showdown of the 5th Annual J.E.M. All Star Classic. Both teams came to play and it turned out to be a thriller to the end.

MVP- Tavon Jones (Linden, NJ)- This was Jones type of game. Up and down and isolations in which he relishes. The Linden product was on a mission to show he’s one of the purest scorer’s in the state and he answered the bell. In the isolation situations Jones broke down his defenders and found the bottom of the hole most of the afternoon. On defense he got showed his speed as he stole the rock at half court and scored the game winning bucket. I love this kid’s heart and determination. He impressed some of the national high school scouts that were in the building. No question he was the MVP.

Jared Kimbrough Forward (Neptune, NJ)- Kimbrough was a beast inside. He collected rebounds none stop and scored on put backs with ease. I like how he was able to collect himself before he went back up to get the bucket. He has the skills to go to the perimeter but I enjoy his motor on the blocks. He seemed determined to grab every rebound in sight. He has the length, skill and motor to be a sneaky prospect down the road.

Raymond Bethea Guard (Atlantic City, NJ)- America’s Playground has been a dominant force in South Jersey basketball for years and now they just added Bethea. This kid seems to grow every time I see him and add some swagger to his game. During the Garden State Showdown he showed extreme versatility with his ability to handle the rock and score with his size. He also collected some boards in the process. His confidence continues to grow and before you know it he should be a name to know in the Garden State.

Nick Hohenstein Guard (Middletown, NJ)- Nick is a hard-nosed tempo setter with some good skills. He can either score the rock or make things happen for his team. I like how he doesn’t back down from any competition and sometimes makes it look easy. I think he’s headed to CBA which will be a great spot to spend his high school career.

Reggie James Guard (Trenton, NJ)- James is slated as the top rising frosh in Mercer County and he didn’t disappoint. He excels in transition and in scoring opportunities. He has the body of a high school sophomore right now and the scoring mentality to go with it. A super steal and buzzer beater by Jones is the reason he didn’t leave with the MVP honors.Trenton Catholic is the cream of the crop in Mercer County and now they have added a real good one.

Roderick Massenat Guard (Trenton, NJ)- His cousin is former TCA and Drexel University standout Franz Massenat so this kid has it in his genes. You can see the potential oozing through his veins especially when he picks his spots to attack. He has the size and instincts to be a special player and he showed it during this event. He has a mixture of point guard and shooting guard skills that definitely translates to the next level. Now he needs to stay humble and let his game develop.

Najohn Dickerson Forward (Trenton, NJ)- Dickerson showed some extra stuff in his game yesterday. I didn’t realize he developed some perimeter skills and even a jump shot. He seemed very relaxed handling the rock and pulling up. I like how he has expanded his game which should help the Iron Mikes of Trenton Catholic when he arrives in September.

Ricky Bailey (Trenton, NJ)- Bailey was a pure rebounding machine and finisher. I has good leaping ability and an eye for the cup. When he gets in position to score jumps at the opportunity. On the next level he will have to develop his ball handling skills and ability to create an open look but right now he has one of the best motors around.

Cartier Bowman Forward (Ewing, NJ)- Another sneaky prospect in this event was Bowman. He wiry, very athletic and gets off the ground in a hurry. On offense he can finish along the baseline and around the tin. He also like a gazelle when he running the floor. On defense he block shots consistently and is a force on the glass.

Donovan Ryland Guard (Hamilton, NJ)- A few of the national scouts appreciated the toughness of this guard. Ryland is no non sense especially when he’s running the show. He’s not into the show time type of game but instead lets the substance of his game speak. I like how he was getting into the teeth of the defense and making things happen.
Posted by basketball spotlight at 10:21 PM