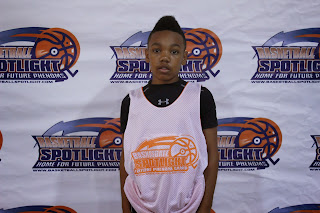 Samartine Bogues Guard (Maryland)- Nicknamed Fat-Man Bogues is a born leader and play maker. He directs the traffic on the floor while breaking down the defense and making plays. He came into this event with a national name and showed why on the floor. He‘s  natural point guard that gets anywhere he wants on the floor. He has the knack of either scoring or dishing the pill.

Jakhary Towns Guard (Michigan)- The kid with the big name from Grand Rapids was eager for the East Coast Challenge. He brings smoothness to the stage and picks his spots nicely. At times he can defer a little too much which could also be a good trait for a future point guard.

Tyrik Petway Guard (Florida)- Playing with the older age group didn’t stop Petway from getting buckets. This kid from the sunshine state surely knows how to find the bottom of the hole. He gives it to you from the perimeter at finishing in the lane. He was the 3rd leading scorer in the camp.

Curtis Staie Guard (New York)- Don’t let the innocent face fool you this kid will bite your heart out. I like his confidence on the floor and willingness to attack defenders off the dribble. He can stick the jumper but also drive past you to the cup.

Daniel Dormu Guard (Maryland)- Dormu is a veteran on the floor at this age. His big game experience showed at this camp has he played with a good poise and tempo. He’s capable of playing wither guard spot and will sacrifice his body on the defensive end.

Jaden Cozie Guard (Pennsylvania)- A tough point guard from the City of Brotherly Love with a great drive, draw and dish game. He makes it his business to get into the lane and spoon feed teammates. He has the ability to read the defense like a book.

John Mobley Guard (Ohio)- The Showman from the Midwest had his moments at the Future Phenom Camp. At an early age he understands that his court vision might be his ticket for a free education. I love his willingness to share the ball as he dribbles through defenders.
Posted by basketball spotlight at 2:22 PM