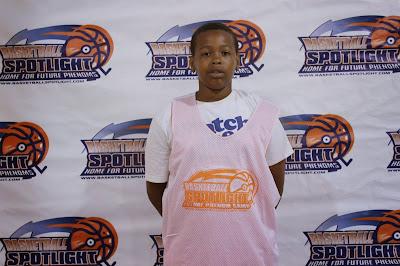 The Basketball Spotlight Future Phenom Camp Class of 2022 was very entertaining to watch. Their games featured some of the top players in the United States. Here’s a break down of the top rising 5th Graders from this event.

Antonio Sellers Forward (New York)- The big fella left the building with stack of trophies. He’s huge in size but has the nimble feet, scoring touch and ball handling skills. On this level he’s a total matchup nightmare because he can grab the rebound and push the rock up the floor while making a play on his own. He can play the bully ball game or the finesse style. He’s a very skilled contributor and finished as one of the best players in the camp.

Mykel Kelley Guard (Delaware)- I coach’s typo almost cost this kid a spot on the all-star roster which would have been a crime. I coached Mr. Kelley for one game and he was outstanding. He has good poise when he has the rock in terms of handling, passing and shooting. Few players in this camp can turn the corner quicker than Kelley. This kid has the goods.

Sammy Scott Guard (Maryland)- Scott played in the same backcourt as McDaniel which was totally insane. This kid also brought the fire when pushing the rock. He’s extremely explosive when scoring and also has the eye for a cutting teammate. One of his mean strengths is his ball handling skills; this kid can dribble through a key hole.

Donovan Leak Guard (Maryland)- Speaking of ball handling, Donovan Leak has a lot of flavor. He has different styles of crossovers and isn’t afraid to pull it out versus anyone. Once he gets past the defenders he will use a floater or step back for a jumper. As he gets older he will learn how to use different speeds to keep the defenders off balance.

Jason Moore Forward (Maryland)- The big fella surprising had good post moves and hands at such a young age. He doesn’t mind playing the grind game and takes pride in backing down defenders. But please don’t be mistaken because he also comes with a skillset.

Jayden Reid Guard (New York)- Reid is a compact guard with the scorers mentality that enjoys splitting the defense before dropping buckets. He’s a fearless attacker that brings that NYC attitude to the floor.
Posted by basketball spotlight at 8:45 AM