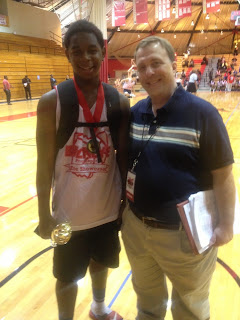 Hello everybody, my name is Marquise Walker. I'm a 5'9 PG from Chicago, IL and I'm very funny.

I went to BBall Spotlight camp in Washington, D.C. a couple of weeks ago. It was a great experience and a lot of competition. I got to play against one of my good friends, PG Jeremiah Francis from Columbus, OH. I love playing against him because he makes me better every time we play. I made the All-Star team at spotlight camp and I put in work at the All-Star game. I finished the camp rated in the top 5. The very next was the John Lucas camp in Chicago and my friend Jeremiah Francis was there also. Since I live in Chicago, I took Jeremiah to a party with me after the camp on Sunday and his dad and my dad went to a party for grownups. Jeremiah is a fun dude even though he acts shy around everybody else. Sunday when I woke up for camp I gave thanks to GOD for everything because it was his day. Then went on and competed on the last day of the John Lucas camp. Clark Francis gave me a critical write up based on my play at the camp. I believe he was right because I didn't play my best that weekend.

The following week I worked harder than ever to prepare for the next camp (Buckeye Prep). I wake up before school at 6am 4 days a week and run, do pushups and sit-ups, and jump rope. I was determined to change Clark Francis's mind about me. In addition to the hard work, I went to open gym at St. Joseph H.S. This school is famous from the movie Hoop Dreams and because Isaiah Thomas went to school there. I competed against Glyn Watson who is a nationally rated senior PG who just committed to Nebraska. I struggled against the varsity guys but I will adjust and keep getting better.

I got to camp Saturday and I saw Clark Francis and thought to myself, don't prove nothing just play your game. The showcase before camp was loaded with top players like Myles Pierre, Bryan Sanders, Shariff Kenny, the Langley twins, Wendell Moore, and my friend Jeremiah Francis. We lost the game but I got the MVP for my team. For my play during the camp I made the all-star game after playing all those games in 2 days I was tired. That's when I realized all the running, pushups and sit-ups I do every morning was paying off. It was show time. In the beginning of the game I was doing crazy stuff but I hit a 3 and got two nice dimes in a row and got going. I dominated the game in the second half and I got top 5 player at the camp. Clark Francis watched the whole game and I think he left camp with a better taste in his mouth about me. I think I proved to him I was a great player.

See You Guys Next Week,
Marquise Walker
Posted by basketball spotlight at 8:13 AM