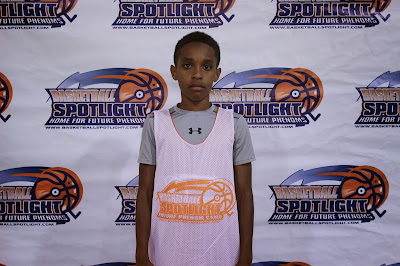 The Basketball Spotlight Future Phenom Camp Class of 2022 was very entertaining to watch. Their games featured some of the top players in the United States. Here’s a break down of the top rising 5th Graders from this event.

Kamaren Rodriquez Guard (New York)- OMG this kid was amazing. He has blurring speed with explosiveness and a skill set. He rocked defenders a sleep and an array of dribble moves before finishing at the tin. He also has an unselfish side that he showed when he was dropping impressive dimes. Defenses tried trapping Rodriquez but he split them with ease. He was definitely worth the price of admission when I saw him play. That’s why he left with the MVP trophy.

Knasir McDaniel Guard (Maryland)- If there was a better passer in this age group please tell me his name because McDaniel court vision was remarkable. One game he could have dropped 20 points with ease but instead he settled for ten assist. His crafty handle got him passed the first line of defense then he hand delivered the rock to his finishers. If he keep this type of approach to his game, a scholarship will likely be in his future.

Jacob Newman Guard (North Carolina)- This combo guard brings a bulldog type approach when he’s attacking the hole. He knows how to cradle the rock so defenders can’t strip the ball. Then he uses good body to control to finish at the cup. His style also initiates contact that sends him to the charity stripe. On the defensive end he’s willing to rebound but must learn to give more effort on his on the ball techniques. He finished as one of the top 5 players in the camp.

Keyon Webb Forward (North Carolina)- This other Carolina product was a problem and seems to have prospect written all over rim. He has the lanky build combined with some developing skills. I was surprised how skilled he was in terms of finishing off plays in transition. Trailing guards strip to strip Webb but he had the presence of mind to avoid the defender and still finish. This kid is going to be someone to look out for in the North Carolina area.

Grant Ott- Large Forward (Indiana)- I had the displeasure of coaching against this kid and he killed us. He was totally unstoppable on the blocks and shot the rock at about a 90% clip. He got deep post position and just feasted on the smaller front line. He also dominated us on the glass and made it impossible to get second chance points. We had no answer to him inside.
Posted by basketball spotlight at 7:42 AM