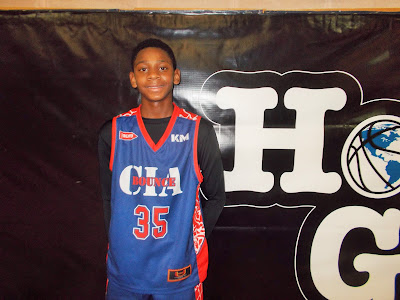 The Clash For The Cup 5th Grade Division had some good upcoming talent. We took notes on the top players and here’s our look at the top performers.

Elijah Fisher Forward (CIA Bounce)- The top 2023 in North America. Elijah can play 1 thru 5. Attacks the basket like a man possessed. Can also step back and shoot from beyond the arc. He can guard any position and protects the rim. He is the key to our running game in transition. He had a tremendous weekend at the Clash For The Cup.

Marquese Josephs Guard (CIA Bounce)- Probably the most athletic guard in the class of 2023. He will always guard the other team’s best players and is a problem in transition. Has a smooth jumper and gets to the basket at will. Marquese has a 30" vertical and is the fastest guard in his class.

Jumaani Beery-Reece Forward (CIA Bounce)- A true post presence, if he gets the ball on the block it's going in. He also is a great passer out of the post. Protects the rim and takes pride in rebounding the basketball. One of the best big’s in his class.

Preston Gayle Guard (CIA Bounce)- A super quick combo guard who can play the 1 or 2. Shoots the ball with ease and has unlimited range. Has a great motor and takes pride in playing defense.

Shaun Alvi Guard (CIA Bounce)- Alvi is a pure shooter but also has the ball handling skills to play the one. very crafty player and is one of the most skilled in his class.

Jermaine Go Guard (CIA Bounce)- Small by size but plays with a big heart. A true point guard and floor general. Sees the floor extremely well and plays for his teammates. His ball handling is like no other.

Tahaad Pettiford Guard (Team IZOD)- Pettiford was Sports U top performer all weekend. He not only played both ends of the floor but also scored from anywhere on the floor. When he attacks the basketball he finishes well and plays under control.

Elliot Cadeau Guard (Team IZOD)- Elliot is a very unselfish floor general and enjoys getting teammates involved. He plays with a high motor and gets it done on the defensive end of the floor. He’s a natural leader.

Christian Greeley Guard (Team IZOD)- Greeley shoots the ball with ease. He stepped up big against CIA Bounce with 13 points in the finals. He’s one to watch and a capable scorer for this team.

Christian Pierre Louis Guard (Team IZOD)- Pierre Louis is very aggressive around the rim and attacks the basket with force. Rebounding and filling the lane is second nature for Christian.

Brandon McCreesh Guard (Riverside Hawks)- McCreesh is a defensive specialist that can guard multiple positions. he thrives in the open court with his speed and finishing ability.

Christian Bliss Guard (Riverside Hawks)- Bliss is a tough as they with a natural nose for the ball. Christian uses his savvy play to keep his teammates involved while also creating for himself.

Caleb Crawford Guard (Riverside Hawks)- Crawford is a natural shooter with extreme play making he often keeps the defense on there heals with the aggressive play and is the engine that gets Riverside Hawks.
Posted by basketball spotlight at 9:26 AM