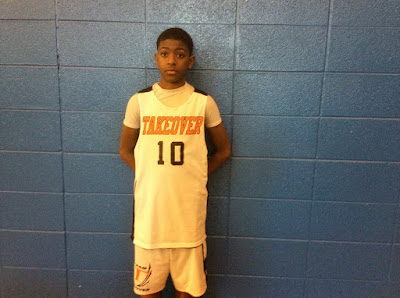 The Basketball Spotlight Clash For The Cup 7th Grade Division had some great battles and some of the top players in the region. Here’s our first look at the top performers from this event.

Kino Lilly Guard (Team Takeover)-Lilly plays with great pace and he is always on balance (utilizes the jump stop) when converting play after play. He can knock down jump shots from all over the court and he's an excellent driver (solid 1st step) as well. He is one of the few players that have a solid mid-range game to boot and he appears to be getting more confident with each event. He nailed 5 treys for Team Takeover in the finals.

Trevor Keels Guard (Team Takeover)- Keels has grown a little and trimmed up from last season. You can see the explosiveness in his game. He’s quicker when attacking the lane and finishing at the cup. This quickness also helps him on the defensive end as he shown to move his feet better. His development is crucial in this team’s success.

Jalen Hall Guard (Team Takeover)-He's as skilled and smart as they get but his intangibles are what separate him. He plays with unwavering confidence and just enough cockiness to maximize his talents. It's that type of mindset that allows him to thrive in the big moments. When TTO needed a bucket it was Hall who got the job done.

Malcolm Dread Forward (Team Takeover)- Dread was consistent on the wing all weekend. He has good size and is fundamentally sound when he has the rock. He also shows the versatility to get anywhere he wants on the floor and score buckets. He finished the championship game with 12 markers.

Ahmad Harrison Guard (Baltimore United Thrill)- Harrison is definitely a player we will keep an eye on. He showed promise at our national camp and has carried over into the circuit. He’s a proven play maker and scorer. He brings good size to the table and isn’t afraid to use it.

Karell Booker Guard (Baltimore United Thrill)- Booker is a combo guard that showed the skill to score especially in the championship. He showed the ability to score at the cup or knock down the long range shot. He brought an A game effort in the finals.

Rayuan Lane Guard (Baltimore United Thrill)- Lane continues to be one of the best on the ball defenders in the region. BU Thrill is so stacked with scoring that all he has to do is run the team and make sure the rock gets to the right spots.
Posted by basketball spotlight at 12:03 PM