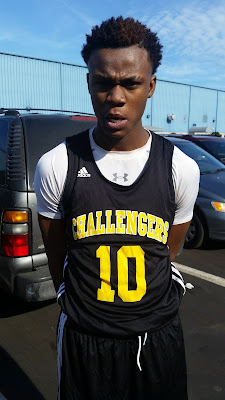 The Basketball Spotlight Clash For The Cup 8th Grade Division had some of the top talent in the region. Here’s our third and final look at this grade level.

Tyshawn Scott Forward (CTA Turbo) – This kid exudes athleticism. Scott has a great frame and he might have had the play of the weekend as he came down the lane and caught a thunderous put back dunk in traffic. One contest we watched he finished with 16 points. We saw him knock down some mid-range jumpers but Scott excels finishing around the basket either in the half court or in transition.

Myles Stute Forward (Team Takeover – Orange) – Standing at about 6’5” he is the best player and prospect on the Takeover 2nd team which is a very competitive team as they came out first out of their pool. Stute was the main reason why as he loved to stroke the trey ball but he could also go mix it up in inside. Two games he finished with 17 (five 3pt) and another 15 (two 3pt) so that is twelve 3pt in three games.

Elijah Everett Forward (NJ Playaz) – Everett could be the next big star for Jimmy Salmons. He is a mobile power forward that gives you consistent production. He can score with his back to the basket or facing up, rebounds at a high level and plays good interior defense as he blocks many shots. He is a big time prospect. He finished with 14 points in the game we watched.

Kaleb Peterson Guard (Team Loaded 757) – Peterson is a strong fast guard that has a great motor. Right now he scores best in transition. Kaleb is another one that always seems to be around the ball. He is a good rebounder for his position and can guard 1 through 3.

Noah Farrakhan Guard (Playaz)- Farrakhan proved to be one of the best guards in the region in their showdown with Havoc City. The floor general put on a show including 23 points and a bunch of dimes. He’s extremely difficult to slow down because he has an array of moves. He also has explosive leaping ability which he showed on a thunderous follow-up dunk.

Jordan Lewis Guard (Team Loaded 757) – Lewis is always in attack mode which puts pressure on the opposing defenses. He knows how to get in the seams of the defense in the half court and he is a good enough athlete to finish against size at the rim. Jordan also thrives in transition. We didn’t see him shoot many jumpers when we watched but once this is added to his game he will be tough to stop.

Marcus Dockery Guard (Havoc City Elite) – Dockery is a scoring machine. The southpaw can stroke it from deep behind the 3pt line. Dockery can also finish well around the basket either in the half court or in transition. He finished with 21 points in one contest and 14 points in another.

Zai Roberts Forward (Team Loaded 757) – This power forward plays hard all the time. He seems to always be around the ball whether he is grabbing a tough rebound or diving on the floor for a loose ball. Zai finishes good around the rim and can hit short range jump shots. He is the heart and soul of his squad.

Cam Byers Forward (B’More United) – Cam is a strong power forward that isn’t afraid to mix it up inside. He has a patented spin move and he can finish with either hand around the basket or in transition.

Caleb Dorsey Forward (B’More United) – Caleb just reclassed so he is new to this class. Standing 6’4” he has good perimeter skills and a nice jumper out to the 3pt line.

Corey Barnes Guard (B’More United) – Corey is a great team player with a great approach to the game. He can play multiple positions and he can do everything well including strapping you up on defense.
Posted by basketball spotlight at 1:41 PM