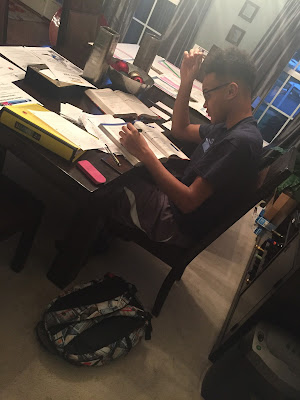 Terrence Putting In The Real Work!

This week I'm going to talk about school and basketball. The major snowstorm that hit gave us a whole week of school off, so I had to get back into the groove of things. We came back on Catholic Schools Week, which is a week of honoring Catholic education in the United States. On Monday we didn't have a theme. Tuesday the theme was class color day and wacky hair day. It was also student appreciation day program for the students, so we played games as a school from 1-2:00 before dismissal. Wednesday was open house and special person lunch when you can bring a family member or friend to eat with you. We also had a liturgical service in the afternoon as a school. On Thursday, our theme was jersey and crazy sock day and student appreciation day two. We did a thing called "buddy sports" where two classes pair up and do sports together, so the 8th grade class was paired up with the Kindergartners. It was really fun interacting with the little guys. Friday our theme was faith, so we held a mass from 8-9 AM in our church. After that we headed back to our classrooms and finished the day out. We also received our report cards on Friday and I ended up with a 3.9. It always feels good to get good grades! Now onto basketball.

This weekend we played our last session of Made Hoops before the championship weekend. We came into this session 8-0 and knew that the two teams we played were going to give us all they got. For our first game, we played NY Gauchos. We came out sluggish and didn't have a good game but still won going to 9-0 on the season. Our next game was a DMV rival with Team Melo. We knew we would have to come out to play hard because they were a good team. We came out and executed and won 53-14. After the game my family and I went out to eat to end the night off.

In closing, over the week I have gotten closer to God, back into the school rhythm, and played basketball. I also had the Carolina Panthers winning the Super Bowl but they lost which I was kind of mad about lol. I wanted to see Cam win it but the Broncos wanted it more! That's what it's about with every game...who wants it more. Well I'll talk to you guys later next week in diary #4!

Peace!
Posted by basketball spotlight at 7:57 AM