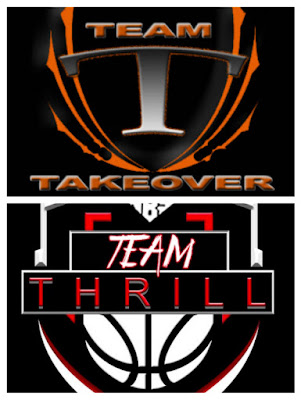 With many areas of the country always arguing about who has the best basketball talent it was apparent this past weekend in Neptune, NJ that the DMV/Baltimore area might be on top. With the three major shoe companies trying to stock pile talent starting in the late middle school years hopefully gaining allegiances from players and parents for the long haul through high school two shoe company teams were front and center when the dust settled. Nike Team Takeover from the DMV versus the newly Under Armour sponsored B’More United Team Thrill was for all the marbles. You hear people say less is more but in both these team’s cases more is more and they have done the stockpiling of talent in their respective areas that is only a short ride up or down I95. It was 9 versus 9 with all the players on both sides being able to be the guy on another team but rather they decided to play on a super team that can bring different benefits for their basketball careers. All 18 players are highly rated players in their region. When the dust settled Team Takeover pulled away late in the second half to win 54 to 34. Takeover was up 29 to 21 at halftime. 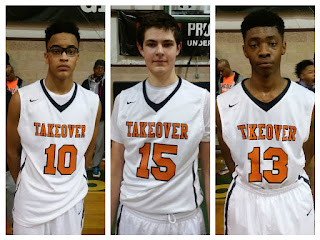 MVP- Terrance Williams Forward (Team Takeover) – Williams just knows how to play to his strengths. He always has been an elite finisher around the basket as he knows how to use his body to finish against longer defenders. Terrance has extended his range out to the 3pt line as he knocked one down in the chip and his consistency on his mid-range jump shot is evident along with making a high percentage of his FT’s. Always an elite rebounder and passer for his position he finished with 19 points against B’More United, 19 in the semi against the Gauchos, 16 in pool play against Hilltoppers Heat and 18 against Team Loaded in pool play.

Hunter Dickinson Center (Team Takeover) – Standing at 6’11” he is hard to miss standing in the center of the zone or posting up on the low block. Hunter is moving better and has improved his rebounding. A high IQ player with a good feel for the game that knows when to shoot or pass. Dickinson knows how to work the high post and find his players for easy shots or shoot a jumper of his own where you might not find a center that has a shooting touch like him anywhere in the country. Right now his biggest strength is blocking or altering shots in the lane on defense. Hunter has also improved his baby hooks and finishing around the basket.

Earl Timberlake Forward (Team Takeover) – Earl does everything good which makes him a matchup nightmare. An athletic long player that can play point forward if needed as he is one of the best passers on the team. He scores right now mostly in transition or attacking the rim in the half court. With an improved jump shot Timberlake will be one of those players that is next to impossible to stop. Timberlake rebounds at a high level and has the ability to push the ball putting pressure on the defense. Earl also can guard 1 through 4 and is playing above the rim. A 5 category contributor, he had 10 point’s against B’More United in the chip. 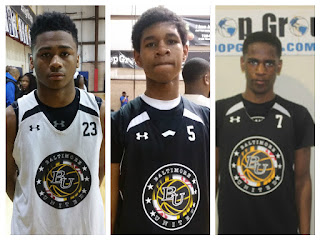 Jordan Toles Forward (B’More United) – Probably the most athletic player in the region, Toles is a high flyer that thrives in transition. His motor is off the charts. Jordan can defend 1 through 4 at this age and with a developing jumper he is poised to move over to the off guard position as he moves into high school next year. He had 13 points against both the Gauchos and Team Final both in pool play. He can be a five category contributor.

Justin Lewis Forward (B’More United) – Standing at 6’6” he might be the best prospect on this team. Justin is very athletic and plays above the rim in transition. He can score around the rim and rebound at a high level. A very unselfish player with a good feel for the game, once Justin adds a consistent mid-range jump shot he will continue to catapult his already lofty status as one of the elite in the DMV. Justin is very young and if he can add a few more inches to his already strong frame we are looking at a player that many other players and coaches would love to have on their team.

Rahim Ali Guard (B’More United) – Ali has good court vision and understands how to get his teammates the ball using passing angles. He has some flash to his game so you often see him drop a nifty no look pass. He also has the ability to knock down mid to long range jumpers out to the 3pt line. Rahim possesses that tough Baltimore guard mentality. He had 11 points against Team Final in pool play.

Posted by basketball spotlight at 8:39 AM