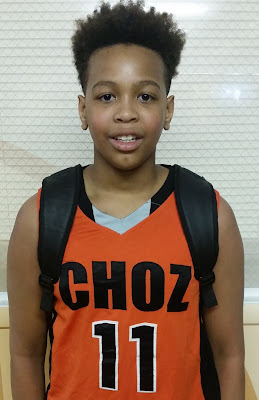 The Clash For The Cup 6th Grade Division gave us a look into the future. Here’s a second look at the top performers in this age group.

Antonio Sellers Forward (Gauchos) – Sellers is a match up nightmare. He can take a smaller defender down in the paint or bigger defender out on the perimeter. Sellers just knows how to score the ball. He has a nice stroke out to the 3pt line and he can really knock down the jump shot. Antonio can also play point forward as he has a high basketball IQ.

Jayden Lemond Guard (60 Elite) – Lemond is the engine that makes 60 Elite go. He is a floor general that has a great pace to his game. Jayden knows when to get his teammates involved or when to score a basket on his own.

Dariq Whitehead Forward (60 Elite) – Dariq is a long athletic combo forward. As he gets older I see him moving exclusively to the perimeter but right now he makes his money in the paint. His motor and athleticism allows him to get a lot of rebound put backs and he excels on the fast break.

Matt Flipowski Forward (60 Elite) – Great size for a post man at this age. Matt has a mean streak that I like and he keeps the ball high when he receives a pass from a guard or he rebounds it off the glass. Good outlet passer and he rebounds at a high level. Matt also finishes efficiently around the basket.

Francisco Matei Forward (Riverside Hawks) – Matei is a man amongst boys at the 6th grade level. He plays so hard and is unstoppable in transition. Francisco uses his strength to clean the glass and finish around the basket in traffic.

Kameron Rodriquez Guard (Riverside Hawks) – Quick, pass first PG that loves to drop dimes to cutting teammates. High basketball IQ, Kameron never seems to get himself in trouble on the floor. He keeps his dribble and always has his head and eyes up as he is probing the defense looking to exploit their weaknesses.

Tyler Hawkins Guard (Riverside Hawks) – This strong NY guard understands how to play to his strengths. Right now that is attacking the basket off the bounce or finishing in transition. Tyler has a great first step and also is able to make nice passes finding open teammates for easy buckets. He finished with 14 points in the game we watched.

Ronald Greene Forward (New Heights) – Greene was arguably one of the better prospects in the 6th grade division. He is a long forward that moves well for his size. He is a menace on the defensive end as he knows how to block shots. With a developing offensive game he finishes well around the basketball or in transition and also rebounds at a high level.
Posted by basketball spotlight at 8:43 AM