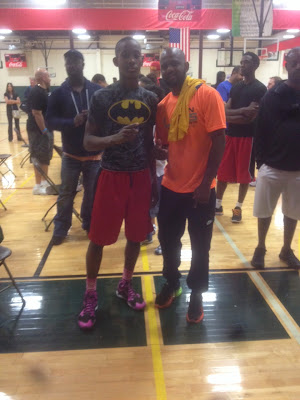 Wassup world, I'm back reporting my third and final entry about my camp experience. First, I want to start off by thanking God for getting me to the camp safely and allowing me to compete against the nations top players. Without god none of this would be possible. Now, let's talk about the final day of training. Sunday was a little shorter than Saturday but I still feel like my overall game is improving. We went through some dribbling and shooting drills. My ball handling skills and jump shot is becoming better and better each time I work on it.

After we did skill work John Lucas gave us a little speech on how to become a better basketball player and he introduced us to some people that rank and evaluate each player. You know I was really focused while they were speaking and I made sure I took everything they were telling us and applied it on the court. I needed to make sure I was doing the right on court so I can get noticed by these people and also it would help me become better player on the next level. After we had that speech we did 1 on 1, 5 man weave, and full court man to man pressure. To be honest I literally destroyed my opponent. I felt so good doing it to because I felt the improvement I made from participating in this camp. We did one hour of competitive drills and then we started our 5 on 5 games. These games were competitive but in my opinion nobody was a match for me. The second game I played I made my defender fall, lol. He tried to reach so I had I had to teach. I drew the foul and made the free throw. Even the kids on the other team was like, good move boy. Overall I enjoyed myself, I competed, and most importantly I had fun.

I would like to thank John Lucas for inviting me to this phenomenal camp. This was by far, the best camp I attended. I would also like to shout out my two bros Marcus aka "CAPO" and Markquis Nowell for helping get to the camp.They looked out for me and I appreciate them for that. I would like to thank Basketball Spotlight and Mike Melton for letting me write about my camp experience and feelings. Most importantly I want to thank GOD! Without him I wouldn't be able to compete and play on high level. I enjoyed myself and I this was the best experience of my life...so far.

P.S. If you want to succeed as bad as you want to breath then you will be successful!
Posted by basketball spotlight at 1:01 PM