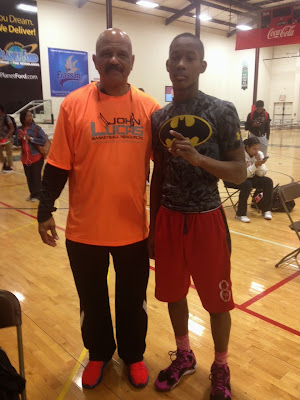 Wassup world, this is Jalen Carey documenting my second entry about my experiences and feeling about John Lucas camp. This camp is the real deal, no lie. Today was long day and I feel like my game is improving even more since I attended the first day of the camp. We went from 11:00 am to 8:00 pm. It was non-stop skill work and strength and conditioning for the first 5 hours. All coaches were pushing each player hard and getting on your back if you messed up on a drill. I like when I am being pushed because I know that somebody cares about my success.

Today at the camp we did a lot of skill work such as ball handling, shooting, strength, and conditioning. I made sure I went hard in every drill and I was trying to impress some coaches as well. After we had five stations that killed me. The stations were filled with different dribble moves, shooting and conditioning. The station I disliked the most was the strength and conditioning because in Houston it is scorching hot. They had us doing push-ups in the grass, sprinting, and a lot of leg work. Even though I disliked this I knew that if I wanted to be a pro one day I will have to go through this rigorous training.

After the five stations we ate lunch and we got a little bit of time to shoot around before we scrimmaged. I made sure I got some shots up before we played. When the games started I made sure I stayed focused and I made sure I played every scrimmage like it was the last time someone ever saw me play. I knew that kids wasn't going to pass the ball as much as my AAU team, but I made sure I hit my shots and gave it to the open man. I wanted to impress everyone in the gym. I think I played great today but it's over with so I have to go out with the same mentality tomorrow. This is Jalen Carey, and I will keep you posted about the progress I made and my experiences throughout the camp.
Posted by basketball spotlight at 4:06 PM