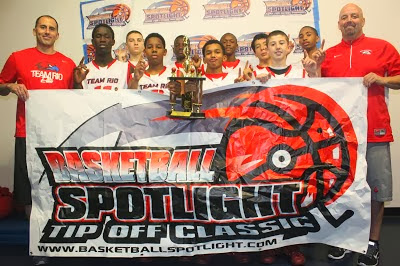 The 7th Grade Division of the MLK Classic should be very interesting. The Grand Finale champs make their season debut and Team Rio is here to show they are the new kings of the circuit.

Team RIO National: TRN made heavy buzz after storming through the Tip Off Classic. Now by donning the #1 spot in the region they should be a favorite to cruise through this tournament also. Standing in their way should be Grand Finale defending champs Team Nelson.

Team Nelson: Speaking of the defending champs, TN has heard the talk about several teams over the past few years but always found a way to get snatch the main banner when it counts. We will see how they open up the season this weekend.

MJ Mavericks: The Mavs made a little noise at the Tip Off Classic, while making it to the finals of the Tip Off Classic (Orange Division). Last year they gave the crowd some excitement in this event and we are looking for them to have a repeat performance.

DC Blue Devils: DC Blue Devils bring in a wealth of experience including the Mitchell Twins. Now they must be ready to show they are among the elite in the class. This will be a good start for these guys.

Team Final: TF will be looking to make a name for themselves in this age group. They have some tough competition to conquer in the process.

RJS: The Burlington County boys will be looking to rebound after a tough outing during the Tip Off Classic. They have shown the ability to bounce back in the past.

Team Phenom: Team Phenom is coming in representing Philly. This means they will be playing with heart and determination. They made a little noise at the Tip Off Classic.

PBC Boys Club: PBC will be looking to impress us after coming up short at the Tip Off Classic. Here’s their second shot on the big stage.
Posted by basketball spotlight at 3:47 PM