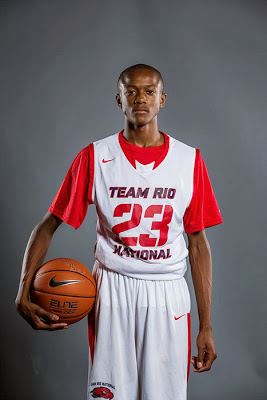 The MLK Classic 7th Grade Division showed some usual suspects and usual results. Here are the top performers from the weekend.

MVP
Scottie Lewis Forward (Team RIO)- Lewis gave another outstanding performance. His athleticism has been well documented but more notice needs to be shown on how he impacts the game. Despite leading the team in scoring he also had about 8 blocks and numerous steals in the finals. This kid just plays the game at a different pace than his peers. He has the flair for excitement but also brings his lunch pail like a blue collar guy. Few players totally separate themselves from others on their level but Lewis is one of them. He’s one of the best 7th Graders I’ve seen during my Spotlight years.

Ahmadu Sarnor Forward (Team RIO)- During the semi-finals it was Sarnor’s play that helped Rio earn an early knockout of Team Final. TF came out strong but Ahmadu’s aggressive and bruising style of penetration wore down the Nike squad. He also showed some finesse in his game with a smooth pull up jumper. Finally he made his presence felt on both ends during the finals.

Jordan McKoy Guard (Team RIO)- While Lewis has gotten headlines McKoy is also putting together a great start of the season. He has proven to be one of the best finishers in the region. He fills the lane well before converting with either hand. He seems to be gaining confidence with his jump shot and is still a pest on defense. McKoy helps Team RIO’s high octane offense by also hitting the boards and out letting the rock.

AJ Hoggard Guard (Team RIO)- Hoggard had fun this weekend running up and down while dishing the pill. He has thoroughbreds running all around him so it’s just a matter of him picking his target. I still think we are about two years away from seeing mature product because he body needs to catch up with his basketball instincts.

Jalen Brooks Guard (Team RIO)- Brooks spent this weekend getting acclimated with his new teammates. There wasn’t resistance from opponents so he joined in on forcing turnovers and scoring in transition. As their schedule gets tougher he will be counted on to bring that experience he gained from playing with the “Supreme Team” last season.

Mark Bradshaw Guard (Team Nelson)- Bradshaw’s best outing came in their loss in the finals. The lefty seemed like the only teammate that came to face the RIO challenge. He stayed in attack mode and didn’t stop competing even when the game was out of control.

Donta Scott Forward (Team Nelson)- Scott was a shot blocking machine in their contest against the MJ Mavericks. He anchored the defense and swatted shots from every angle. He needs to pick up his offensive production for them to make a deep run on the Spotlight circuit.

Asim Richards Forward (Team Nelson)- TN has been known for developing players over the years and Richards seem like the next in line. Last season he played a smaller role but now he looks like the rugged forward is ready to roll. He was able to bang the glass and throw some bodies around.

Karam Cummings Forward (Team Nelson)- Cummings is another budding new contributor for Team Nelson. He’s a little more perimeter oriented than Richards but also can snatch a few boards when available. He will need to pick up some of the scoring slack left by Mikeal Jones.
Posted by basketball spotlight at 8:11 PM