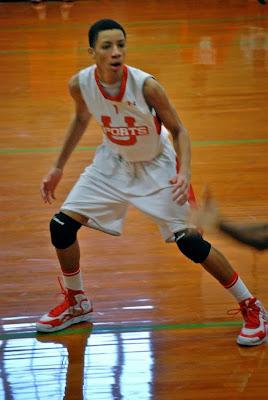 What’s up this is Atiba Taylor Jr. reporting back with another basketball diary entry. Happy New Year everyone I hope your holiday was as good as mine.

2014 is finally here and I’m more than excited about it. This year I have new goals to fulfill and I’m focused on completing them all. Basketball wise I definitely want to bring that AAU National Championship trophy home to Jersey this year it’s a must. We fell short last year losing in the national championship game to Georgia United and it still bothers me to this day. My team has been preparing for this season going hard weekly in the gym. We’ll be in Springfield Mass Jan 18th and 19th for the Hall Of Fame Tournament and this time the outcome will be different, we’re ready.

I spent my New Year’s Eve at my grandmother’s house in NY with my Mom and the fam. I popped a bottle of that Cider and celebrated New Years. Monday – Saturday I pretty much just spent time with my Mom because she was leaving to go back to Atlanta G.A. early Sunday morning so basically we just shopped, dined out, and relaxed.

The holiday and the snow kind of messed up my training throughout the week so I really didn’t get back into the gym until Saturday. I played in my first school scrimmage with the Hackensack Comets Saturday afternoon. It’s really not competitive at all but I’ll use those games to practice on some stuff that I probably wouldn’t try in a normal game until I’m comfortable. Later that night I had a 3-hour practice with my AAU team. After practice I gave my Mom a huge hug and a kiss goodbye because she had to be on the plane by 6:00am. I got home real late that night but I was back up early at 8:30am for a 10:00am practice. After practice my dad took Luther, Tyrek, and I to watch a couple high school games at Kean University. We watched St. Benedict’s Prep vs. Trenton Catholic and Roselle Catholic vs. Union High. Both St. Benedict’s and Roselle won, I love going to high school games because I can always learn something new from someone on the floor.


Posted by basketball spotlight at 2:10 PM