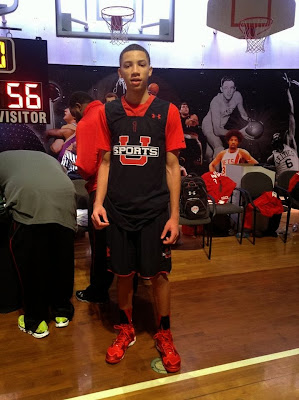 Atiba Taylor At Hall Of Fame

Monday’s are usually sluggish because it’s the beginning of a long school week. After school my Dad had me do a different type of workout that I know will help my all-around game but I wasn’t thrilled about it Lol. He took me to the gym for a spinning class, which is basically an indoor cycling training class. The class benefits are too burn calories, it’s a low impact exercise; reduce risk of injury, adjustable tempo, build muscle tone, and increased cardio endurance. I mean at the end of the class I was done and my legs felt like jelly. Going hard for a full 60 minutes of peddling a bike at high speeds with resistance is crazy but it’s well worth it Lol. After the spinning class I did some pull-ups, dips, and some super lightweight training but high reps.


Tuesday I had early dismissal from school, I got out at 12:30 and was back in the gym at 1:00. My Dad and I focused on mid-range shots the whole time. I had to make 100 mid-range game time shots high and low percentage. It probably took me maybe 300 shots to make the 100 because if I slacked off from being tired the shot didn’t count along with the shots I missed. It’s a tiresome workout but I know it helps. After I finished getting shots up I did my normal pull-ups and dips then I went home to get my homework done.

Wednesday was my off day so I chilled. Thursday night I worked out with my trainer Chris. My teammates Lewis and Zeg came with me and we put in that hard work. We did a lot of shooting, conditioning, and a bunch of different drills to sharpen our game. I felt that my shot was falling more than normal and I know my jumper is getting better. My Dad says consistency, reputation, form and follow through is key and he’s right because it’s showing on the floor.

Friday night I had a Yoga class but I didn’t make it so I ended up going to the movies with some of my friends. We saw that Kevin Hart and Ice Cube joint called “ Ride Along” and it was real funny. I got home kind of late so I went straight to sleep so I could get ready for The Hall Of Fame Tournament in Springfield Mass that weekend.

So Saturday is here and we’re headed to Massachusetts for The Hall Of Fame Tournament and I already have a chip on my shoulder because I received a Facebook message from some kid named Michael Cool Hands who plays for Commonwealth Academy saying he’s going to give me work and drop 40pts on me so in return I kindly put that team in a skillet and cooked them Lol. Honestly I never even heard of this kid and I wouldn’t be able to even tell you if he was on the floor or not Lol. Look to sum it up we beat those dudes by 30+ and I promise you he won’t write me again. Our second game of the day was against NY Lightning B team. Even though we blew them out the game was fun because I played against a few of my friends from my old Gauchos days and it was cool seeing them and their families. Later that night we all went to Applebee’s to eat and after that we bugged out in the hotel all night. We probably didn’t go to sleep until 3 or 4 but still woke up focused more than ever.

Sunday is finally here and our first game of the day is against NY Lightning A team in the semifinals. The game was cool at first but we ended up pulling away. They tried playing us tough the whole game but playing tough and fouling doesn’t put the ball in the basket. They talked a lot of trash the whole game and tried there hardest which ended up in a 20-point blowout from us Lol. My bro Curtis played well for them but that’s about it. SO it’s Team Izod vs. The NJ Playaz in the championship game at The Hall Of Fame and WE ARE READY!. Like I said last week my team was coming to this tournament to win and that’s what we did. We beat The Playaz by 15 points and ran away with the chip. A lot of people think because they beat us in Mike Melton’s Tip Off Classic Tournament that they are better than us but they’re not. We had two practices before that tournament and they been playing since September so they was better prepared. Did people forget we’re the #2 team in the country? Our team is stacking up and I suggest other teams do the same because we refuse to lose any more games. The Playaz are #2 team in the region but Team Izod Sports-U is the #2 team in the country just know that.

Well I’m staying in Mass tonight to watch tomorrow’s Hoop Hall Classic games so until next week I’m out!!!!!