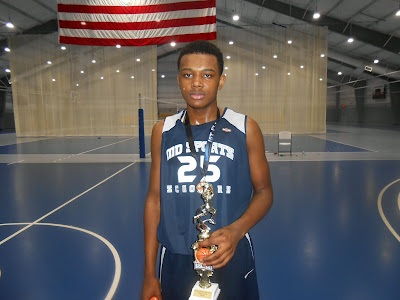 The 8th Grade Division of the MLK Classic truly gave us a chance to watch some new talent. Here’s a breakdown of some of the top performers that came to play in Pennsylvania.

MVP
Marvin Price Forward (Maryland Scholars)- Price brought his A game all weekend. The lefty crashed the boards and scored inside similar to Zach Randolph. He runs the floor like a deer and never stops attacking the tin. He continued to beat the opposing big man down the floor. I like the way he approaches the game.

Rasheed Brown Guard (Maryland Scholars)- Brown is a combo guard the has a scoring mentality. The southpaw has a mean floater that he uses as one of his main weapons. He also excels in the open floor with his ability to push the rock.

Brandon Madison Guard (Maryland Scholars)- Madison has made the full transition to point guard and I must say he looked decent this weekend. He’s too strong to keep out the lane and can finish through contact. He also made it his business to keep everyone happy. He showed good flashes.

Jordan Jones Forward (Maryland Scholars)- Jones was one of the best prospects in the building. He has good size and seems to be very light on his feet. I like his rebounding and shot altering ability. He also has decent touch especially when facing the basket.

Antwuan Butler Guard (PYO)- Butler gave opponents problems all weekend from the point guard position. He broke down the defense with ease and finished against the trees inside. He has the toughness that Philly guards are known of and some good court vision to go with it.

Ahmad Williams Guard (PYO)- Williams goes hard from buzzer to buzzer. He’s a powerful combo guard with unique leaping ability. He tries to play above the rim regardless of what defenders are in the area. He injured his shoulder by trying to jump over Jones for a dunk in the finals.

Theodore Senior Guard (Team 12)- Senior pushes the rock with the speed and power of a Ty Lawson. He went end to end in a blur and was able to convert. On defense he was a menace of the press by picking off passes like a corner back. I was impressed watching him play the first time in person.

Shaquest Chavis Guard (Team 12)- Chavis is a lefty with a lot of swagger to his game. I saw him catch fire from deep and verbally let his opponents know that he heated up. I like his size, ball handling and range on his outside shot.

Le’vaun Miller Forward (Team 12)- Speaking of size Miller did most of the damage for the Brooklyn boys inside. He’s a quick leaper and powers up well when getting put backs. He’s a bandit along the baseline with a good upside.

Moses Brown Forward (Team 12)- Brown is definitely more prospect than producer right now even though I saw him in stretches get things done. He’s long so he can alter shots and score in the paint. He’s also beginning the run the floor better.

Dave Mitchell Forward (Boston Spartans)- Mitchell is a slashing athlete that scores his best in transition. On defense he plays the passing lanes well and can guard multiple positions. I’m interested in seeing how he develops.

Dana Tate Forward (Boston Spartans)- Tate is a nice looking prospect for the Spartans. He can go either outside or inside. He’s not very physical right now but that should change down the road.
Posted by basketball spotlight at 1:02 PM