One On One Feat. Jahvon "Inferno" Quinerly (Playaz) 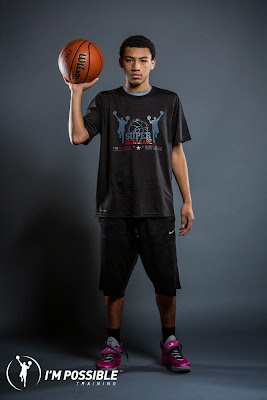 Every year during the Tip Off Classic a player steps out and shows his peers that he is ready for the next step. This year Jahvon Quinerly made his move. The high scoring combo guard lit up the opposition while leading the Playaz Basketball Club to the championship and a #1 ranking in our polls. We got chance to holla at the kid named “Inferno” and here’s what he had to say.

BS: How is your season going so far?
JQ: My season is going good. My teammates and I are starting to gel and play well together. The pre-season has been a lot of competitive play so we’ve had a chance to see what we will be up against this year.

BS: How was the “Supreme Team” experience last year?
JQ: The “Supreme Team” was an experience that I feel very blessed to have been a part of. The talent on that team was the best. The organization is great. I was playing with my good friends and we were lucky enough to travel everywhere to compete all over the map. We had a lot of juice around the country. Kids asked to take pictures with us after games and some little kids had even asked us for our autographs at Nationals. Coach Reggie held long intense practices, which started in August so our team bond was strong and it showed on and off the court. We were very structured. At first, that was hard for me to get used to but after awhile I knew it was what I needed at that time to be successful.

BS: Why did you decide to leave the famed “Supreme Team”?
JQ: LOL. Well, without going into too much detail, between my teammates, coach and I, at the end of the season, there was a communication breakdown and some of my teammates ended up leaving. Honestly, I wanted us all to stay together. I was upset about the split but I felt it was time to take on a new challenge and go in a new different direction. It was a hard decision for me, definitely one that wasn’t made overnight. Kind of gave my family and I a taste of what choosing a college might be like. We had to take so many things into consideration. Weighed all the options, pros and cons.

BS: In the Tip Off Classic you caught fire against your former teammates, what feeling was going through your body at that time?
JQ: Prior to the game Luther (Izod) and Ty (Izod) spent the weekend at my house and they joked about beating us by 20+. We actually had a private bet lol. I had to make sure it didn’t happen.

BS: You seem to have great chemistry with backcourt mate Ja Quaye James, talk a little about your relationship with him.
JQ: Ja’ and I have been friends for a long time. We have played summer leagues together in the city for a bunch of years and we chill out a lot. What’s good about Ja’ and I is when we play together we bring the best out of each other. No plays off. He always pushes me on the floor. He knows when I’m being too lax and he will call me out on it. And I try to do the same. When I’m hot he knows how and when to feed me the ball. We bicker but at the end of the day we are bros. Ja -The General is the glue and keeps us all level headed.

BS: How does it feel playing for a legendary organization like the Playaz?
JQ: I have mad respect for my new team/organization and my coaches. It’s still pretty new and we are just starting to get to know each other and put our plan into place for a great season. So many great players came through the program and made it to top schools and some even to the NBA. I’m happy to be Playazfam.

BS: What are your personal and team goals for the season?
JQ: I’ve been eating better and taking vitamins and I’ve learned more about stretching and the importance of taking care of my body and muscles so I don’t get hurt when I play. I do personal workouts daily and throughout the week to build my endurance. I’m also doing skill training. I always want to improve my skills. My team goals are for us to improve with each practice and make sure that our team is conditioning and ready once the regular season starts. I want us to be real competitive, and play hard every game. No plays off.

BS: What’s your dream college?
JQ: I’m not sure now but when I was younger, I watched a real good special on Chris Paul. He was speaking to students about his life experiences and basketball. He went to Wake Forest. That college always stuck out to me ever since that show. LOL.

BS: Who would you consider the best opponent you ever faced?
JQ: Lol, I would have to say that my young boy Luther (Izod) is probably the toughest defender I have faced. He has challenged me at many practices since back in the KSK days. (Yea he knows which practice I’m talking about in particular). He is by far one of the best defenders in the class of 2018. He can guard all five positions.

BS: Once you get hot do you feel there’s anyone that can slow you down?
JQ: Once I get hot, I’m in my zone. I’m unstoppable.

BS: Give me one word to describe your game.
JQ: Fire

BS: Give me one word to describe Basketball Spotlight.
JQ: Competitive

P.S. Thanks Mike/Bball Spotlight for all the write-ups over the years that helped and encouraged me. I feel lucky that I’ve been exposed to such great things so far in my life because of basketball. I don’t appreciate people who help me enough sometimes, so thanks. It’s funny, my little brother Jules is 5 and is just starting out. He has the same skills like me and I’ve been watching him play. I can’t wait to see when he gets a little older and starts to get write-ups. It’s exciting at that youngest age...I remember waking up and rushing to the computer to see if I got that Spotlight write-up lol. ~ Jahvon Q.
Posted by basketball spotlight at 8:41 AM