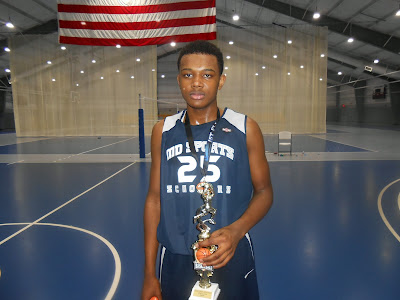 The MLK Classic is in the books and the 8th Grade Division and introduced us to some new faces. We decided to bring back our segment of Best Of The Best.

Best Performer: Marvin Price (Maryland Scholars)
Price took home the MVP honors because he dominated the entire event. This kid is a relentless force that has the good touch to score in traffic. He’s definitely a difference maker.

Best Point Guard: Theodore Senior (Team Twelve)
Senior was exciting to watch as he put tremendous punishment on the defense. He will be one to watch as the Spotlight circuit carries on.

Best Athlete: Ahmad Williams (PYO)
The high flying guard plays with a reckless style similar to Dwayne Wade. He showed some above the rim skills throughout the weekend.

Best Backcourt: Brandon Madison, Rasheed Brown, Steven Parker (Maryland Scholars)
These boys played well together and showed the true meaning of sharing the rock. They didn’t care who scored the most or who got the shine. They were all about the wins.

Best Shooter: Shaquest Chavis (Team Twelve)
As documented in the article Chavis showed he had a ratchet. If he catches fire is over for opponents.

Best Versatility: Dana Tate (Boston Spartans)
Something tells me that this kid will be someone to watch down the road. The New England has been producing legit wing players and this kid seems to be next in line. He can get it done inside or outside.

Best Prospect: Moses Brown (Team Twelve)
A few years down the road Brown might be the name a lot of scouts are talking about. His length cannot be taught and his skill set is developing.

Best Kept Secret: Abraham Diaz (Boston Spartans)
Diaz showed flashes of being a good prospect down the road. He doesn’t like getting physical which is okay because he naturally a guard.