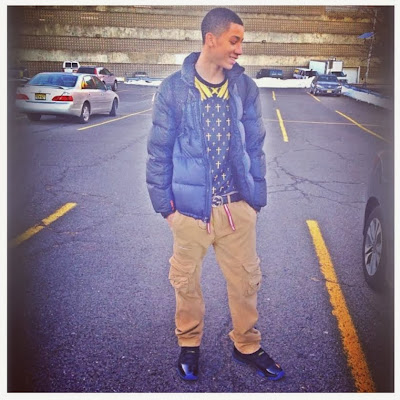 The beginning of my week started off pretty rough. All week my back was killing me from something I did to it at practice last weekend. Monday – Wednesday I couldn’t do anything basketball wise so I rested for a few days. I tried using a heating pad but it really didn’t work that well so then I tried the Epson Salt bath, which actually took some of the soreness away along with the Icy Hot and Advil I was taking. I was doing everything I could to get myself prepared for the weekend.

On Thursday after school I went to 24 hr Fitness to work out with a trainer. We worked on a lot of core, explosion, and upper body exercises for an hour. It was a hard workout but it’s definitely worth. After I was done with the trainer I put some shots up for an hour. I’m trying to elevate my game and become more of a mid range shooter. I know the mid range area will be a major factor for me next year at the varsity level.

Friday night I was suppose to have a game in Teaneck somewhere with a local team but the game got canceled so I really didn’t do anything. Had I known the game was going to be canceled I would have went to the Roselle Catholic vs. Plainfield game which I heard Roselle won.

Saturday morning Luther, Nazi, and I went to a basketball workout before we had Izod practice. The workout was really good we did pretty much all mid range work and a lot of off the dribble jump shots. Focused more on ripping the ball low and elevating on the pull up jumpers. I loved the workout and it was a great warm-up before practice. At practice Coach B and Coach Seth just went over everything we’ll need to know for this upcoming weekends tournament in Springfield Mass. Coach Reggie came towards the end of practice and we all just talked about working hard and getting ready for high school ball. After practice Nazi, Spoon, Jahvon, and I went to 24hr Fitness to play ball later that night. We played 4 on 4 games all night with some random dudes in the gym but nobody could knock us off the court. We didn’t leave them gym until 1:30 am.

On Sunday we had practice at 12 noon and we had a controlled scrimmage the entire time. I’m more than confident that we will be ready for The Hall Of Fame Tournament, we won the championship last year and we plan on winning it this year too. After practice my Dad, Luther, and I went to the Roselle Catholic vs. The Patrick School game at Kean University. The atmosphere and game play reminded me of a real college game. It was a tough game, Roselle took their first loss of the year and The Patrick School got the win. After the game I went home and took it down for the night.